In 1973, Denis Kitchen purchased a farm in Princeton, Wisconsin, to house the headquarters of his growing publishing company Kitchen Sink Press. The eventual 2015 Eisner Award recipient would use this rural location to shepherd independent artists by providing a platform of free expression without the strings attached to a major publisher. The farm would be immortalized in a drawing by R. Crumb in 1985. A life-long defender of boundary-pushing comics, Kitchen helped found the Comic Book Legal Defense Fund in 1986 and took the debate to the national stage on Larry King Live in 1989.

This staunch defender of the artform now has his collection of Wisconsin comics on display, along with work loaned from ten other artists, in Wisconsin Funnies: 50 Years of Comics which is split between the Museum of Wisconsin Art (MOWA) and Saint Kate – The Arts Hotel in Milwaukee. I was only able to visit MOWA for an exhibit preview of the half of the exhibit described on their website as “a comprehensive overview of comics in Wisconsin” (The other half is “comics with a political bent.”) The parent museum is gorgeously placed along the banks of the Milwaukee River. Masks were required and everyone remained respectfully socially-distant. The price of admission is $15, which will also get you access to the museum for an entire year.

Nearly 200 works by 31 artists are featured, all of which are included in a 250-page catalog with high resolution images of each piece in the exhibition ($45 + shipping, ISBN 978 -0-9994388-5-5). The exhibit opens with a mural on the second floor that was not yet completed when I was there. [Curator Tyler Friedman explains, "We commissioned three 30x30" panels for the exhibition lead-in wall to give the appearance of a giant comic strip. Peter Poplaski, Jeff Butler, and John Porcellino contributed a panel a piece."] Through the glass doors you will find expertly framed artifacts, a mixture of comic books and original art, complete with historical descriptors that add context to every piece. (I was told a couple cases of other ephemera will be going up but they were not installed when I was there.) One not need be an expert in independent comics to find value here. The exhibit offers a wonderful learning experience and each section provides a nicely bracketed story. Wisconsin Funnies was co-curated by Kitchen, director of the print culture center at UW-Madison James P. Danky, associate curator of contemporary art at MOWA Tyler Friedman, with contributions by historian Paul Buhle. 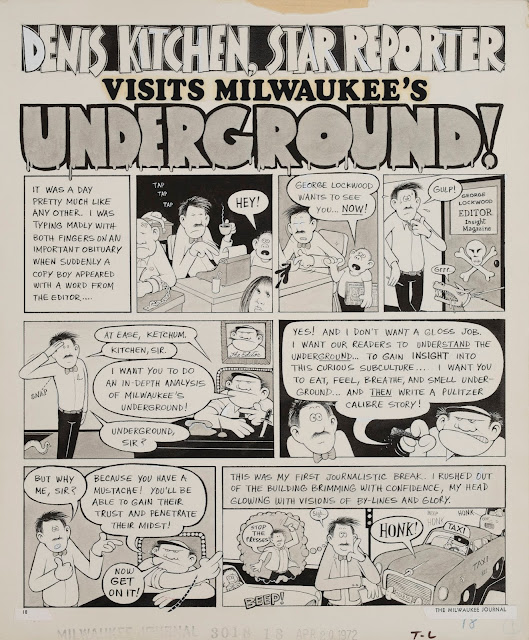 The exhibit is intended to mesh with the political passions accompanying the Democratic National Convention slotted to begin on August 17th in Milwaukee. With that sprit in mind, Wisconsin Funnies does not disappoint. Coming into the exhibit one can find a series of hand sketched originals as well as printed pages from comic books and strips. The exhibition offers an opportunity to learn about not only the history of Wisconsin comics, but also an opportunity to see the evolution of an art form. The artists featured in this collection serve as a primer for the political and social struggles of the postwar era through the Reagan years. 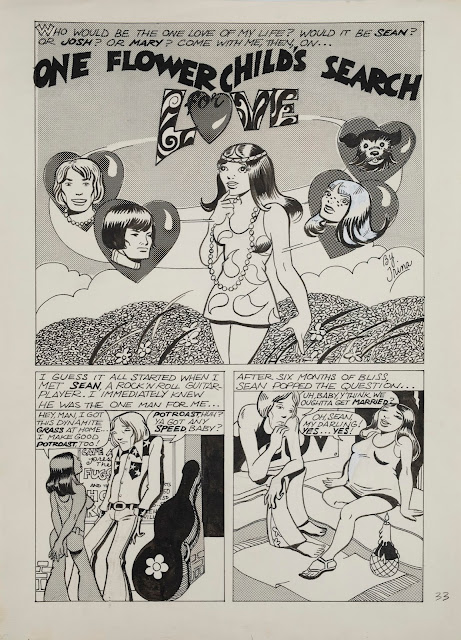 Kitchen Sink Press not only championed independent artists, but also collaborated with industry giants. Stan Lee and Marvel collaborated with Kitchen on Comix Books, which featured work by Trina Robbins and Art Spiegelman. Selections of original art from Robbins’ One Flower Child’s Search for Love is featured in Wisconsin Funnies and serves as an illuminating exploration of love and relationships during the 1970s, pushing back on preceding generations of conservative social strictures. Kitchen also published reprints of classics such as Harvey Kurtzman’s The Grasshopper and the Ant as well as Will Eisner’s The Spirit and A Contract with God. Selections of original art from these important works are included. 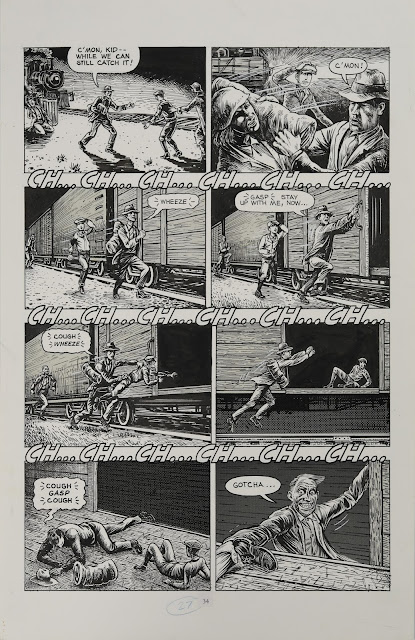 One series of panels that particularly stood out to me are from Dan Burr’s Harvey and Eisner awards winner Kings in Disguise. The story is about a kid during the Great Depression searching for his father. The feelings of despair and longing jump off the panels. The imagery is stunning and reminiscent of the Hollywood films made in the early 1930s that were depicting the economic destruction as it was happening. One film in particularly that shares the aesthetic of Burr’s art is William Wellman’s Wild Boys of the Road (1933), which follows young teens who leave their burden-ridden families. Burr’s story, published in 1988, is just as moving as the images created and distributed during the Great Depression. Original pages by Burr from Kitchen’s underground newspaper Bugle (1975-1976) are on display as well. 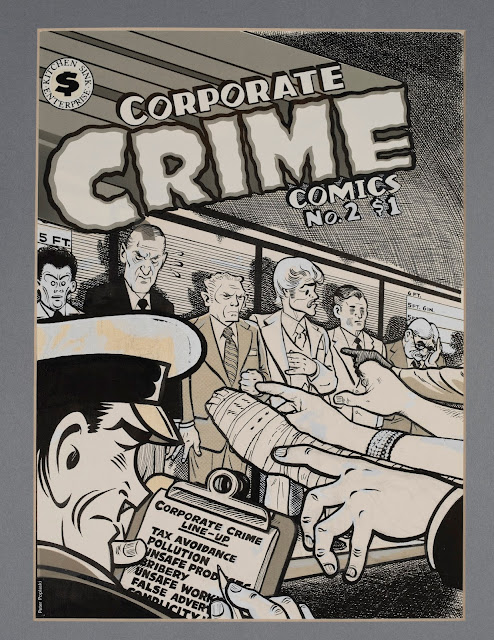 Peter Poplaski’s original cover art for Corporate Crime Comics #2 is of special interest for its nod to classic Dick Tracy comics. A quick glance will remind one of the “round up the usual suspects” line from Casablanca. What makes this cover special upon deeper reflection is how Poplaski depicted not standard supervillains or street thugs. Instead, the lineup is full of white-collar criminals guilty of tax evasion, pollution, and unsafe work environments. In 2014, Poplaski sketched Kitchen with Stan Lee as they appeared in 1974, which is also featured in Wisconsin Funnies.

Additional artists featured in Wisconsin Funnies are Al Capp, Ernie Bushmiller, Lynda Barry, Jim Mitchell, and many others. There is plenty to learn in this wonderful exhibit. I come to comics from the film studies world and could not pass up an opportunity to learn more about influential comic writers and artists who shook up the industry from right here in Wisconsin. Anyone in the Milwaukee area interested in the history of comics, politics, and popular culture should visit MOWA and absorb the power of this historic collection. 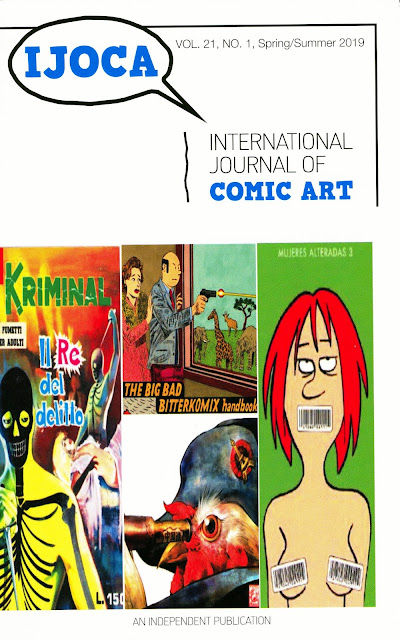