The Swann Foundation for Caricature and Cartoon, administered by the Library of Congress is accepting applications for its graduate fellowship, one of the few in the field, for the 2014-2015 academic year. Deadline for receipt of applications is February 14, 2014. Please email swann@loc.gov or call (202) 707-9115 if you have questions. For criteria, guidelines, and application forms, please see: 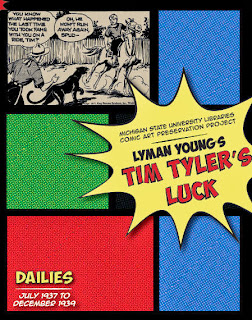 The Michigan State University Libraries, home to one of the world's largest collections of comic art, have established the Comic Art Preservation Project (CAPP), with the goal of making classic comics more widely available to libraries, collectors, and fans.

The first CAPP volume reprints two and a half years of Tim Tyler's Luck, a Golden Age adventure strip created by Lyman Young and distributed by King Features Syndicate from 1928 to 1996. The reprint is authorized by King Features.

The reprint volume contains daily strips from July 1, 1937 to December 30, 1939, and follows young Tim as he faces wild animals, dangerous criminals, and constant excitement as a member of the "Ivory Patrol," a fictitious law enforcement organization in Africa.

The strips were scanned from original proof sheets in the collections of the Michigan State University Libraries, resulting in a clear, crisp reproduction. The MSU Libraries have more than one million proof sheets from King Features Syndicate, along with more than 200,000 comic books and an extensive collection of books and journals about comic art.

The volume also features an introduction by Reade W. Dornan, a recently retired faculty member from MSU's Department of English. In her lively essay, Dornan examines the pop culture influences of the time – including Westerns, the Rough Riders, and boys' adventure books – and compares the adventure hero Tim exemplified to the superheroes created a decade later.

"The years of Tim Tyler's Luck reissued in these volumes showcase Young's career at the top of his game," says Dornan in the introduction. "By 1937, nine years after the strip started, Young has figured out how to tell a whopping good story."

"Newspaper comic strips like Tim Tyler were – and are – read daily by millions of people, but they're virtually lost to historians if not collected into volumes like this," explains Clifford H. Haka, director of the MSU Libraries. "We're extremely happy to help preserve this wonderful piece of American popular culture."

Tim Tyler's Luck is printed on the MSU Libraries' Espresso Book Machine, and available through Amazon.com for $18 plus shipping: http://amzn.to/17L7ffK.

Posted by Mike Rhode at 9:41 PM No comments: