Sat May 1, 2021
11:30 AM - 12:30 PM SGT
https://chronicles.peatix.com/
Description
A year after Singapore's circuit breaker, author of Chronicles of a Circuit Breaker, Joseph Chiang joins book editor, CT Lim in reminiscing the quirky, and sometimes, downright perplexing days of the lockdown. In this special book launch event with Mulan Gallery, learn how comics play a role in recording the ongoing Covid-19 pandemic.


ABOUT THE BOOK
Funny and stark, this comic strip memoir relives the surreal days of Singapore's circuit breaker days from April to June 2020. Cartoonist Joseph Chiang records the strangeness and the mundanity of daily life during the circuit breaker such as the toilet paper shortage, mask-wearing woes and forced family time. Chiang's slice-of-life stories provide humour during unprecedented times and document local events and idiosyncrasies that stemmed from this new-normal era.

Get the book here.

ABOUT THE AUTHOR
Joseph Chiang is a visual artist and printmaker. He is the founder of Monster Gallery, a creative print studio; and the Young Printmakers League, a mentorship programme supported by Noise Singapore. He was commissioned by the National Arts Council to organise the Contemporary Printmaking Festival as part of Singapore Art Week 2017. He has exhibited in Singapore and internationally, and was invited to show his work at the 10th World Triennale of Original Prints and Engravings in Chamalieres, France in 2017.
------------
Chronicles of a Circuit Breaker Exhibition
Exhibition Day: 1 - 15 May 2021
Event Address: 36 Armenian Street, #01-07 s(179932)
Contact us at (65) 6738 0810 or enquiry@mulangallery.com.sg
Posted by Mike Rhode at 9:28 AM No comments: 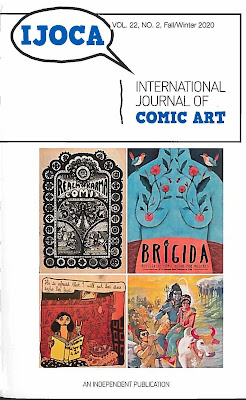 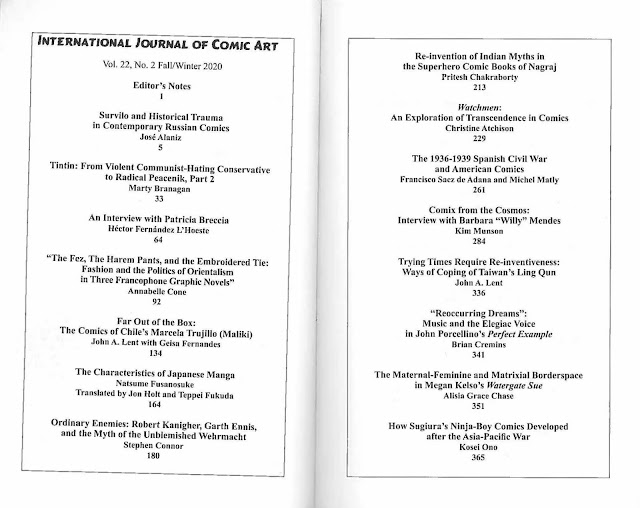 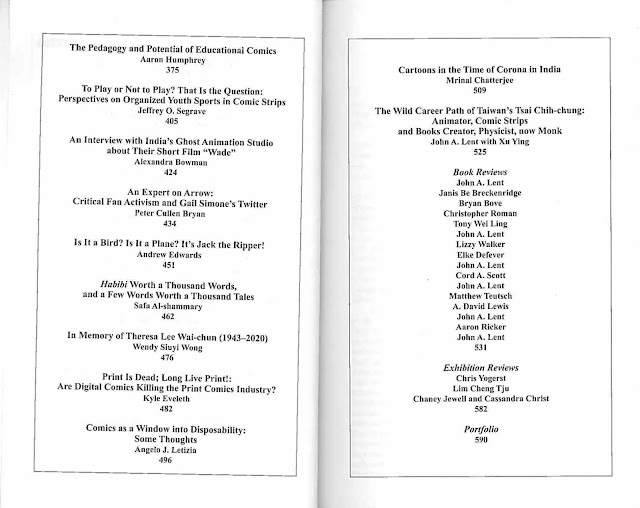 Posted by Mike Rhode at 8:46 AM No comments:

Shimizu Isao, a giant in manga studies scholarship (and founding International Editorial Board member for IJOCA) left us on March 2, 2021 at age 81, after a battle with prostate cancer. Shimizu was astonishingly prolific. Over a period of roughly fifty-years from when he began to publish on manga history, he penned and/or edited in excess of 100 books, but this was just part of his legacy.

Born in Tokyo in 1939, Shimizu had toyed with the idea of becoming a cartoonist or animator after graduating university, but found himself instead doing editing work between 1963 and 1984 for publishers in the heart of Tokyo’s Jimbochō secondhand book district. His growing interest in satirical prints and cartoons, particularly those of the Edo (1600-1868) and Meiji (1868-1912) periods, as well as comics history in general, led to him haunt those used bookstores. He managed to amass a huge collection of historical comic art cheaply, at a time when there was very little interest in this material. His home overflowing with a collection that swelled to over two million items (magazines, clippings, books and prints) and became the Japanese Manga Archives (Nihon Manga Shiryō-kan). This collection not only enabled Shimizu to research, exhibit and publish using this material, but he also allowed other historians, museums and students access for their research.

Public institutions had long ignored this kind of material as ephemera of little value. However, as Shimizu’s writing, talks and exhibitions began to draw attention to pre-war manga history, his collection and his expertise became sought after by more and more museums, galleries, libraries, universities, and the media, and became integral to a number of major exhibitions in Japan. These include, his early “Meiji Manga” exhibition at Machida City Museum in 1978, “300 Years of Japanese Manga” at Kawasaki City Museum in 1996, “Images of Meiji – The World of French Artist George Bigot in Japan” at Itami City Art Museum in 2002, and the “Grand Manga History: Tracing back to Edo” at Kyoto International Manga Museum in 2015. At the time of his death, the large “Giga – Manga” exhibition that he supervised – consisting of comic art from Edo satirical prints, called giga, to early popular comics of the 1930s - is touring a number of public and private museums throughout the country. He had also been involved in exhibitions and manga related events in France, Germany, Spain and Italy.

After Shimizu quit his editing work around 1984 to concentrate full time on researching and writing on satirical cartoons and manga history, he was employed as a research associate at Kawasaki City Museum for nearly two decades. In 2006, he became an advisor to the Kyoto International Manga which acquired a large portion of his collection. The “Shimizu Collection” there forms the core of the museum’s pre-war historical holdings. At both of these institutions, Shimizu helped foster a number of young curators and researchers active at various institutions today. At Teikyo Heisei University, where Shimizu worked as a professor for over a decade, more than a few students had an interest in satirical cartoons and manga history kindled by his lectures.

Shimizu was also involved with the creation in 2001 of the Japan Society for the Study of Cartoons and Comics (Nihon Manga Gakkai) and was a member of its inaugural board of directors. This remains the only national society for this field of study in Japan. However, Shimizu no doubt felt slightly marginalized, for the vast majority of the society’s more than 350 members are interested first and foremost in post-war and modern narrative comics expression (rather than Shimizu’s first love of satirical cartoons and pre-war comics history). Moreover, for the limited number of younger scholars who now actively research early manga history, Shimizu’s long view perspective on this history - a perspective built upon earlier manga histories which connects comics to a centuries-old humorous art tradition - had become the subject of criticism. Nevertheless, while Shimizu’s books are primarily aimed at a general audience, many of them are, and will remain for many years to come, essential reading for any scholar of manga. In Yoshimura Kazuma and Jaqueline Berndt’s 2020 book Manga Studies, which introduces thirty foundational books in the field to Japanese readers, Shimizu’s 1991 classic Manga History (Manga no Rekishi), is at the top of the list as a “first step into Japanese manga history research.”

Shimizu’s earliest books were two self-published cartoon collections in the early 1970s. The first grew out of his fascination with French artist Georges Ferdinand Bigot who produced satirical cartoon magazines while living in Japan at the end of the nineteenth-century. The other book was a rare collection of wartime political cartoons. These two interests, Georges Bigot and wartime cartoons, along with Edo period humorous prints, Meiji period satirical magazine cartoons and cartoonists, manga pioneer Okamoto Ippei, early postwar comics, and newspaper comic strips, were themes he would revisit throughout his career, revealing surprising new discoveries each time. Shimizu wrote or edited eighteen

publications on Bigot, many of which have been reprinted multiple times; his 1992 book Bigot’s Japanese Sketch Collection (Bigōt Nihon sobyō-shū) has gone through an incredible thirty-one printings. Among his other publications that are highly regarded are his 1989 book on the early postwar magazine ‘Manga Shōnen’ and akahon manga books, his 1997 book on Hasegawa Machiko’s Sasae-san comic strip, and his 2008 book on the pioneering story manga artist Yokoi Fukujirō. For scholars of manga history, his chronologies of manga publications, manga dictionary, and his reprints early satirical magazines, in particular his 1986 series Manga Magazine Museum (Manga zasshi hakubutsukan), are indispensable references. His self-published journal Satirical Cartoon Research (Fūshi-ga kenkyū), 48 issues between 1992 to 2005, is an important resource for scholars of political cartoons.

Shimizu’s efforts to preserve, record and bring manga’s early history to a broad audience earned him the 1986 “Special Jury Award” from the Japanese Cartoonists Association and in 2015 a “Special Achievement Award” from the Japan Agency for Cultural Affairs. It is no exaggeration to say Shimizu’s achievement in making material available through his collection, exhibitions and publications has made it possible for a new generation to conduct pre-war manga history research today.

My own research on early manga history was sparked by Shimizu’s publications on Meiji satirical cartoons, written in highly readable jargon-free prose. I had the good fortune to meet him a number of times over the years beginning in 1995 when I attended one of his public lectures. He acted as chair in 2002 for my first academic paper in Japanese on Frank A Nankivell and his student, Japan’s first career mangaka Kitazawa Rakuten (for more details, see Fusami Ogi’s interview with Shimizu in IJOCA 5(2) 2003). The last time we met was at another talk public talk in 2018 on Rakuten. As always, I was amazed by his encyclopedic knowledge of not just Japanese, but also foreign cartoon history (He could be described in Japanese as an ikijibiki or a ‘living dictionary’). His curiosity was also insatiable, and his eyes would sparkle whenever he a conversation turned to manga and cartoon history research. While my own take on the history of manga development has come to diverge from his over the years, his work continues to be important for me. On the bookshelves of my study, I keep over fifty of his books close at hand as a constant source of information and inspiration. I, like many others, felt his ever-inquisitive mind would continue to provide us with more research, discoveries and exhibitions. Rest in peace Shimizu-sensei, and thank you.

A version of this will appear in print in IJOCA 23-1.

Posted by Mike Rhode at 9:06 PM No comments: