by John A. Lent, publisher and editor-in-chief of the International Journal of Comic Art. This
review will appear in print in the Spring/Summer 2016 IJOCA issue later this summer. 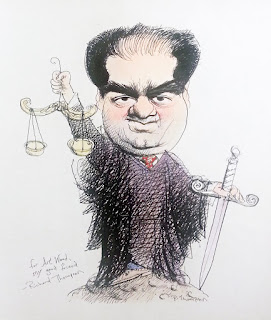 Richard Thompson, who has had exalted praise heaped upon him from the likes of Arnold Roth, Pat Oliphant, and Edward Sorel, figured as the subject or author of three books since 2014*, on all of which, IJOCA exhibitions and media reviews editor Mike Rhode was a main sparkplug.  For at least two decades, Mike has enriched comic art and its scholarship through his many bibliographies, resource aid to researchers (check out acknowledgements in books by comics researchers and you are likely to see Mike’s name), and interviews with cartoonists published in his online Comics DC, IJOCA, Washington City Paper, and elsewhere.
Mike is a close friend of Thompson, recognized by Richard sometimes in jest, such as when he signed a copy of his book for Mike: “to my friend, chauffeur, source, & #1 stalker.”  I assume the “stalker” label has to do with Mike’s hounding him to gather together in books the abundance of strips, gag cartoons, humorous drawings, and paintings Richard has penned over the years. 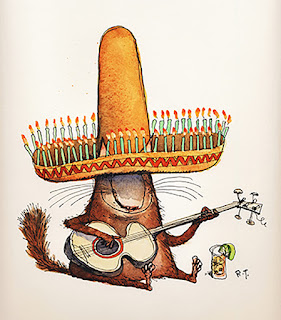 With The Art of Richard Thompson, Mike was part of a team of editors that also included David Apatoff, Nick Galifianakis, Chris Sparks, and Bill Watterson.  In the credits, Mike is listed as “Editor, Project Coordinator, and Copy Editor.”  Mike’s key role was noted with a touch of humor in Galifianakis’s “Introduction”: “…Mike was called in to focus our collective ADHD.  He took to the job, maybe too well, eventually nicknaming himself ‘The Enforcer.’  He’s been superb.  We will never speak to him after this, but he has been superb.”   Mike was sole editor and his Comics DC co-publisher of The Incompleat Art of Why Things Are and co-editor with Chris Sparks of Compleating Cul de Sac.  Comics DC also co-published Compleating Cul de Sac.
Now, to Richard Thompson and the books under review.
Richard Thompson is best known for his “Cul de Sac” comic strip that was nationally syndicated for five years in 150 newspapers.  Starring four-year old Alice Otterloop and her eight-year-old brother Petey, the strip dealt with their relationship and the foibles of living the suburban life.  Thompson retired the strip in September 2012, three years after being diagnosed with Parkinson’s disease.
Richard Thompson’s genius has been spread over different forms and genres (magazine, book, and newspaper illustration, comic strips, caricature, humorous paintings) and shared by an assortment of audiences during his long stints with periodicals such as The New Yorker, Washington Post, U.S. News & World Report, and National Geographic.  He is much respected by other artists for his widespread knowledge, whimsical drawings, articulate use of words, and experimentation with styles and formats.
The Art of Richard Thompson captures the life and career of the artist through interviews or discussions with Galifianakis, Peter de Sève, Gene Weingarten, and John Kascht, and essays by Thompson himself and Apatoff.  The book is attractively designed with hundreds of Thompson’s art works, including scratchy sketchbook drawings, doodlings, exquisite and wall-displayable caricatures and humorous paintings, parodies of other masters’ work (e.g. “Little Neuro in Slumberland”), regularly published strips (“Cul de Sac,” “Richard’s Poor Almanac(k)”), and one-shot (sometimes rhyming), multi-panel, nonsense-filled “instructive” comics.  Some cartoons could easily serve as editorial cartoons.  Acclaimed illustrator John Cuneo summed up Thompson’s art very well:

Everything in a Richard Thompson drawing is funny--each line is put down with a caricaturist’s eye and cartoonist’s vigor.  It’s a rare and daunting thing to pull off; a sofa in a room is somehow drawn ‘funny’ the same way the person sitting on it is.  And also the dog, the side table, the lamp, the vase of flowers, the teacup and the lettering--everything gets filtered through a visual sensibility that’s grounded in exquisite draftsmanship and giddy comic exaggeration.  It becomes a wholly realized world--and it’s delightful. 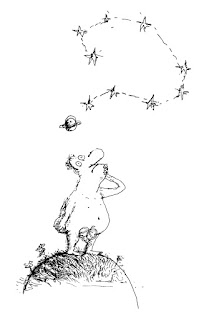 The prose of The Art of Richard Thompson suits the drawings: casual, to the point, and sometimes meant to be funny.  Half (9) of the sub-chapters were written by Thompson; three others were interviews with him.  Thompson’s articles recounted all types of subjects--his new favorite nib, music, caricaturing Berlioz, thinking up a funny name for his “Cul de Sac” family, and the circumstances surrounding his doing a drawing during a Deep Brain Stimulation surgical procedure performed on him.
The Incompleat Art of Why Things Are and Compleating Cul de Sac are part of Mike Rhode’s continuing efforts to fill out the Richard Thompson story.  “Why Things Are” was a weekly column by Joel Achenbach in The Washington Post, which Thompson illustrated with a cartoon.  In the foreword to the book, Achenbach said he would pose a question for the column and Thompson would come up with an hilarious drawing.  An example: The question--Why is time travel impossible?  The illustration-- a man in a time machine hovering over Adam and Eve and the snake and disappointedly bellowing, “Oops! Too Late.”  Or, “Why do we presume that human meat tastes worse than, say, cow meat or pig meat?”  Thompson’s image--a meat counter called “Downer Pass Gourmet” with a butcher standing next to meats called “Franks,” “Chuck,” and “Steak Diane.”

Compleating Cul de Sac supplements Thompson’s The Complete Cul de Sac, which Rhode and Sparks explain is not complete, because Thompson was ill while compiling the book and “accidentally left out some strips,” actually more than 100.  Compleating Cul de Sac collects the “lost” strips, as well as “the early inchoate musings about what the strip should be, the promotional material, the sketches for fans, and finally some fugitive Team Cul de Sac charity art,” the latter to benefit the fight against Parkinson’s Disease.  As with the other two books above, Compleating Cul de Sac is a rich compendium of brilliant art going back to his high school newspaper strip, “Fleabag Theater,”  Thompson interviews with Rhode and John Read, three live Post website chats Thompson participated in, and, of course, the missing “Cul de Sac” strips.
Together or apart, these books provide hours of enjoyment at the same time that they describe in an interesting fashion how a top-level artist got to where he is, how he generates ideas, characters, and strips, and how he copes with adversities.  Rhode and the others responsible for compiling this material have done a great service not just to Thompson’s name, but also to comic art practitioners, those waiting in the shadows to become cartoonists, and to the growing field of comics scholarship.

*Both Compleating Cul de Sac and The Incompleat Art of “Why Things Are” are no longer available from Lulu.com.  Instead, Lost Art Books under Joseph Procopio has undertaken The Richard Thompson Library project and will be publishing editions of them this fall.  Compleating Cul de Sac will be published in a second, substantially expanded edition with additional interviews and recently-unearthed artwork. After these two volumes, other books are projected in the series -- one on caricature by Thompson, pulled together by Scott Stewart, another collecting the best of his comic strip “Richard's Poor Almanac” compiled by Rhode, and likely a Thompson sketchbook.

Posted by Mike Rhode at 8:08 PM No comments: