Leonardo De Sá has written to us about the loss of two experts on the history of comics in Portugal:
Two long-time friends of mine died in the last month — I knew them both for more than 40 years. Two great experts on comics too. Not only in Portugal but in any country.
I wrote a number of books with the first to go, the guy who *introduced* me to Portuguese comics, so to speak, and to the necessity to research and write about local matter much more than about foreign stuff. That was António Dias de Deus, an MD who loved comics and who spent hours every week away from his practice in the National Library researching rare magazines and newspapers and taking notes with those doctors' hieroglyphs that many times he had difficulty understanding himself. He wrote a great number of articles always using a very old typewriter because he never understood newer technologies. I remember that his brother once offered him a more modern electrical typewriter when his old model had broken down and the very next morning he called me over the phone just to vent because the darn thing of course wouldn't work: "the paper leaves automatically eject when I push the button to go to the next line!" He knew 19th century and early 20th century Portuguese comics back when hardly anyone else had even heard about comics from that period or about any of the earlier artists. And he was assuredly one of the most knowledgeable persons I've ever met, both in the comics medium and elsewhere. Unfortunately he suffered a number of strokes so he was no longer able to function properly for more than a decade. Check http://divulgandobd.blogspot.com/2018/11/dias-de-deus-1936-2018.html
The second friend to depart, Jorge Magalhães, was not only a real expert in many areas of comics and its history (British, French, Italian, Spanish, etc) but he was also the editor of a great number of Portuguese comic books. My very first articles about comics were published by him back in 1978 or 1979... And he wrote many comics himself as well, for a number of notable Portuguese artists. Regarding the history of comics his focus was the 1930s onwards. He kept odd hours just like I also do and many times we discussed common interests over the phone way past midnight. He maintained a number of blogs about comics, until the end of his life. His (French artist) wife has just announced his passing in his main blog: https://ogatoalfarrabista.wordpress.com/ .
Besides the regrettable and irreparable loss of dear friends, it now seems I'm the last one still actively researching the history of comics left in the country. I so wish it was otherwise…
Posted by Mike Rhode at 5:12 PM No comments: 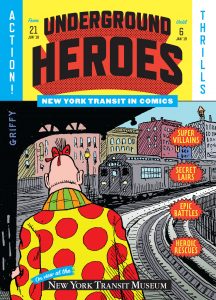 (all photographs are courtesy of the Museum and images of the exhibit are by Filip Wolack)
Though the New York Transit Museum may not be an immediately obvious location for a comics exhibition, it is currently home to one that looks at the way that New York City transit has been represented in comics through the years. Highlighting works going back to the 1880’s, the exhibition includes many types of comics, including political cartoons, superhero comic books from major publishers, and sequential art that was created specifically for the MTA Arts & Design, which is a program of the Metropolitan Transportation Authority to commission art for the area’s transportation systems. 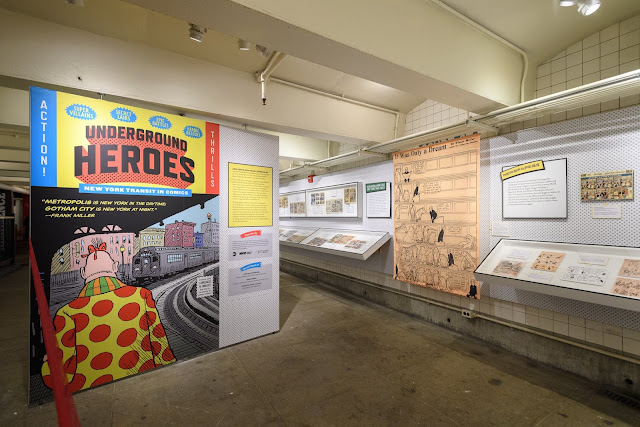 Much of the exhibit is in the form of reproductions mounted on foam core, but this is far from all that is on display. There are dozens of individual comic book issues to show specific examples of the New York City transit trains and stations across the years, including very recent examples such as 2017 issues of Marvel’s The Unbelievable Gwenpool that show creatures in MTA stations. Though Marvel and DC are very well-represented in the exhibit, as might be expected, other publishers and artists are not overlooked. Jodi Shapiro, the Associate Curator at the Museum and the curator of this exhibition, notes that “the show required that we include as many different styles of art and storytelling as possible, and we wanted to feature diversity in both characters and creators. The most important thing was to have good and compelling work that would draw people to visit the exhibit. The show has a whole range of material from the straight-ahead superhero stories, to some very abstract conceptual work. There are some pieces that have a lot of text, and some that are wordless. Some work is very traditional, and some is highly experimental.” Comics experts will find plenty of works that they immediately recognize. An issue of Will Eisner’s The Spirit from 1951 is on hand to show how Eisner incorporated the local trains into his own work, and an example of Dave Berg’s satirical “The Lighter Side...” comic strip for MAD Magazine that focuses on commuting is included in a section focused on commuter woes. But there are also enough unusual items that most visitors will probably find works they have not seen before. In fact, Concetta Bencivenga, Director of the Museum pointed out that many of the artists featured in the exhibit had told museum staff that their works have never been featured in a curated show before. 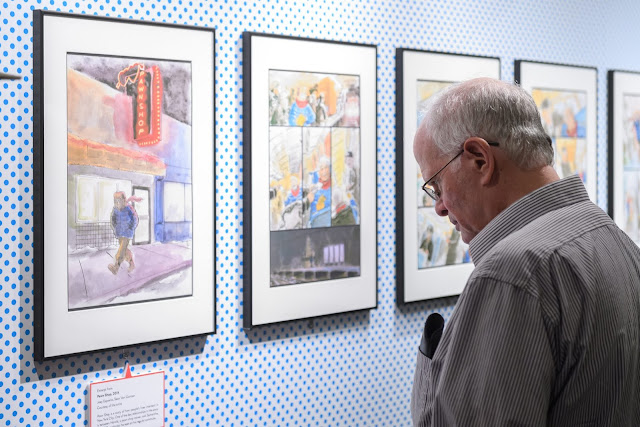 The exhibition does a good job of representing a diversity of types of comics and of authors, but there is an unsurprising focus on creators who lived and worked in New York City. Original artwork by some well-known artists are on display, including a piece by Jillian Tamaki that was commissioned by MTA Arts & Design, drawings of New York City subway stations by Julia Wertz, and comic strips created by Stan Mack. This brings a local flavor to the exhibit that is particularly fitting, given its location, and highlights the way that local artists have been influenced by the same public transportation system that all New Yorkers use on a regular basis. In addition to paying particular attention to local creators, the exhibit also looked within the Museum’s existing collections for content as well. Shapiro said that “The Transit Museum’s archives are vast, and our job is to make it publicly accessible, so we wanted to include works of [art] from our collection, including materials from Amelia Opdyke Jones. She had a long career in comics and in illustration, but the most recognizable work she created as a staff artist for the Transit Authority was called the Subway Sun, a courtesy campaign that was developed to be posted in buses and subway cars.” Beyond her work for public transportation, Jones was the creator of the syndicated comic strip “The Young Idear.” Including pieces by artists who may be primarily known as comics creators gives local visitors a chance to understand artwork that they may have seen on their commute in a different way and also offers comics experts a chance to see works by established comics artists that they may not have previously considered. 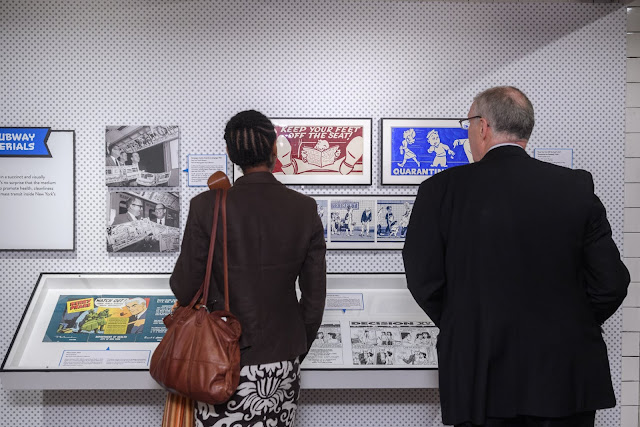 In curating the exhibit, Shapiro did extensive research and worked closely with comics creators and experts alike. She also had the materials reviewed by two comics experts, Karen Green, who is the Curator of Comics and Cartoons and a librarian at Columbia University, and Charles Brownstein, who is the Executive Director of the Comic Book Legal Defense Fund (CBLDF). While the content in the exhibit is interesting and well-researched, unfortunately, the labels on the items do not always include sufficient details to allow visitors to easily find copies of the works on display if they wanted to further examine them. For example, many labels only have the name, author and year, without month or issue number available. It would have been nice if there was a bit more information about each item on display, perhaps even including additional analysis. Overall though, this is a minor quibble given the breadth of content that is on display. 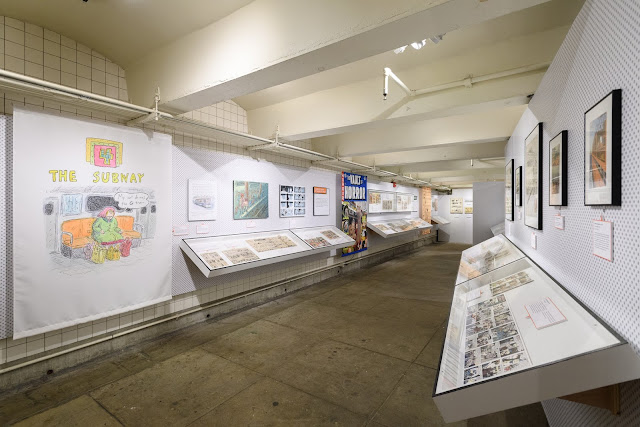 Though the exhibit is only one part in a museum with many different exhibits, it includes over one hundred pieces in total and represents works from more than 120 artists. It is an interesting look at how comics and transit have intersected over the years and it will likely have you noticing public transit in comics in a whole new way. Originally, the exhibit was scheduled to close on January 6, 2019, but it has been extended until March 17, 2019, in part because they are hoping to have more visitors from the comics community see it before it closes. The museum is hosting a range of programs to complement the exhibition, featuring Shapiro, comic artists, scholars, and experts.

(This review was written for the International Journal of Comic Art 20:2, but this version appears on the IJOCA website on December 14, 2018, while the exhibit is still open for viewing.) 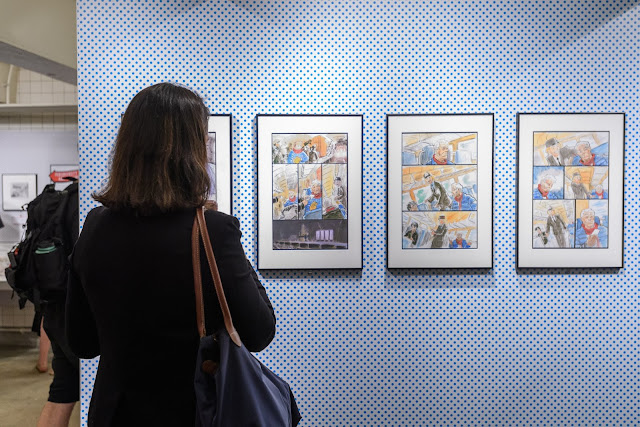 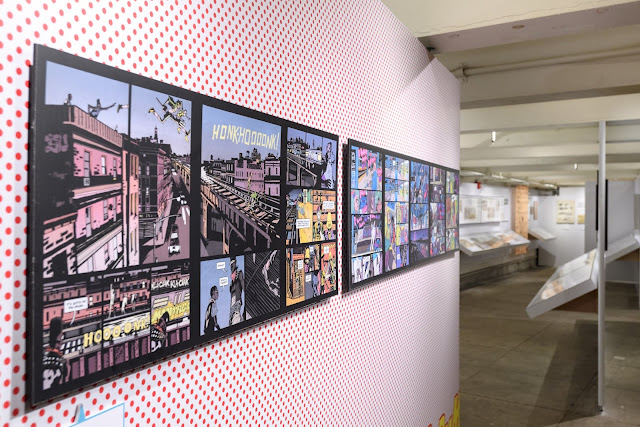 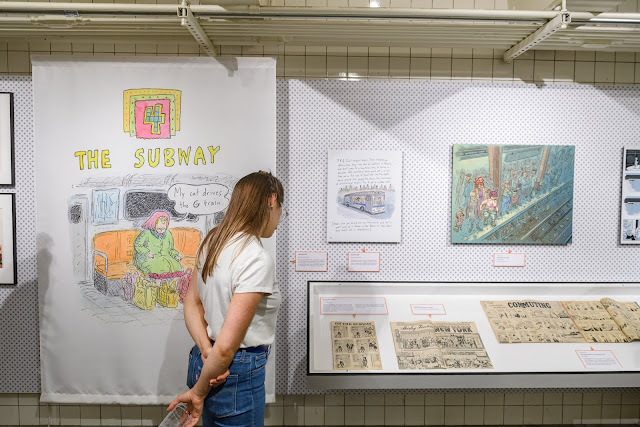 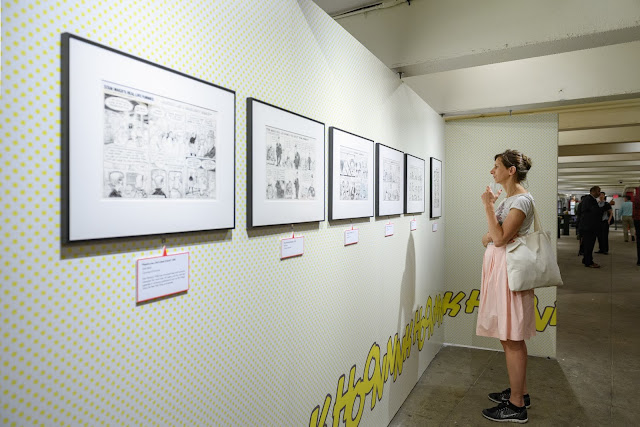 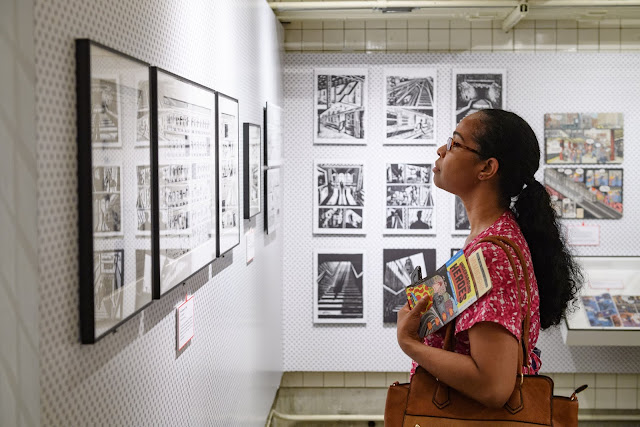 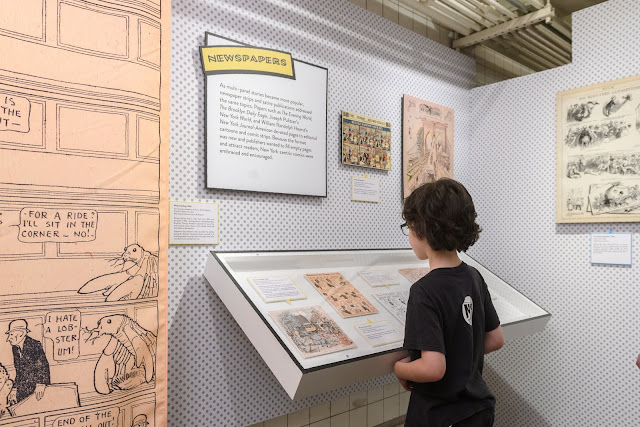