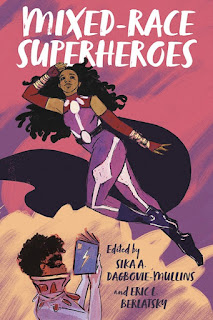 Dagbovie-Mullins and Berlatsky’s ambitious anthology is a wide-ranging addition to the emerging literature covering race in comic books, which explores examples of what it means to for characters to be mixed-race in comic book universes filled with superheroic aliens, demi-Gods, and cyborgs. Contributors cover superheroes from within the pages of comic books; characters adapted to animation, live-action film, and television; and those who emerged first on screen. This adds up to a tumult of mediums, sources, and ideas, and ultimately proves both the book’s greatest asset and weakness.

Mixed-Race Superheroes divides its twelve essays into three sections - “Superheroes in Black and White,” “Metaphors of/and Mixedness,” and “Multiethnic Mixedness (or Mixed-Race Intersections).” Per the book’s theme, each division addresses aspects of racial mixing, whether by examining characters who are textually described as mixed, or those who can be viewed through this lens. These sections are intended to serve as a way of demonstrating different methodologies and angles for contributors to explore the topic.

The book’s first third – the four essays in “Superheroes in Black and White” – concentrates primarily on ways in which originally white characters can be given mixed-race characterization, either through adaptational casting of actors (as with Tessa Thompson’s Valkyrie in Thor: Ragnarok, or Jason Momoa’s Aquaman, both of whom identify as mixed race), or by ‘rebooting’ characters (as with DC’s Rebirth’s Flash, Wallace West). While there is significant overlap between some of the essays contained within this part, others – the introduction of African American poet Gary Jackson’s DC Comics-inspired poetry -- appear deliberately detached from any over-arching thematic commentary.

The second section is “devoted to the ways in which superhero narratives treat the idea of racial mixing metaphorically,” before the final third returns to addressing “more specific categories of racial mixing” (p. 17).  This means that the book deliberately breaks up the first and third sections, which are positioned as exploring similar themes, with the more distinct approach of “Metaphors of/and Mixedness.” This division is confusingly structured and appears largely arbitrary. There is little clear rationale for the reader behind the distinctions being drawn here. Although the introduction recognizes that the first and third parts are interlinked, the book separates them, distinguishing between these sections without explanation. Even when separate essays examine the same character across two mediums, differences in presentation between each goes largely unremarked upon, to the detriment of the subject matter.

The overlap and divergence between the different subject matter and mediums examined can create genuinely fascinating interplays, as competing interpretations of mixedness surface. Yet too often, these connections go uncommented on. Beyond a fascinating introduction which serves both to set out the contents of the essays and foreground larger issues of representation and imagery within comic-book movies, the hands of the editors are often too light. Perhaps more vigorous scaffolding would have rewarded the reader, particularly in setting out an argument about the ways in which different mediums and stories deal with broader issues of race and racial identity. Had Dagbovie-Mullins and Berlatsky provided commentary between the essays, for instance, they could have established a more cohesive argument about who, or what, they view as mixed-race, and how different approaches and methodologies can address different presentations of mixed characters. Miles Morales, for example, is the subject of a pair of essays, one focusing on his initial appearance in the comic book Ultimate Spider-Man, and another on his character’s adaptation in Spider-Man: Into the Spider-Verse animated movie, and yet neither of the essays address one another, or is linked through methodology or approach. Likewise, Venom is discussed in the context of the 2018 film, and in a wider examination of Peter Parker’s black suit phase. An editorial intervention might have helped to helped to expand on the idea that the very nature of the symbiote means that Eddie Brock and Peter Parker develop a liminal state of mixedness when they bond with an alien being, which introduces a further complication to defining who counts as mixed race.

By widening the criteria of mixedness, from characters who are specifically written as mixed-race (such as Miles Morales) to those who meet any symbolic or metaphorical standard of being mixed, Mixed-Race Superheroes expands the concept of mixedness and examine characters from a wide range of backgrounds. This is in line with Dagbovie-Mullins and Berlatsky’s stated aim, to showcase and increase mixed-race representation.

The collected essays, and book as whole, fails to clarify exactly what racial mixedness is, however. Dagbovie-Mullins’s essay on the MCU’s Spider-Man: Homecoming and Spider-Man’s alien costume saga ties together 1980’s comic-book lore with the Marvel Cinematic Universe’s treatment of its mixed-race characters, M.J. and Liz (both transformed from white characters introduced in the 1960s comic book). These show Peter Parker as an interlocutor in textual conversation around race, interacting with mixedness from the outside. Kwasu David Tembo addresses Superman, and his essay poses important questions about who counts as mixed-race in universes where many characters have origins in two-worlds but are written as white. Here, Tembo follows the book’s overall lead in largely approaching race and species as interchangeable terms. As a Kryptonian raised on Earth, Superman has a position of liminality similar to mixed-race characters. Is Superman a mixed-race character, or is he simply being examined through the lens of Mixed-Race studies? Nowhere is this made clear.

Other essays cover topics and characters as diverse as Jason Momoa’s Maori-inspired cinematic turn as the half-Atlantean Aquaman, Marjoie Liu and Sana Takeda’s Monstress, and DC’s post-Arab Spring reimagining of Dr. Fate. Corinne E. Collins and Jasmine Mitchell’s introduce a degree of intersectionality by examining concepts of gender mixedness via queer-coded non-white characters such as the Crystal Gems of Cartoon’s Network’s tv series, Steven Universe, and Thor: Ragnarok’s Valkyrie. These introduce larger conversations about the ways in which mixed-race characters are distinguished, defined and used.

Despite the individual quality of each of these pieces, Mixed-Race Superheroes can sometimes end up feeling less than the sum of its parts. While each essay is well-argued and presents a fascinating angle for approaching the issue of mixed-race superheroes, at no point do these cohere into a whole with a larger narrative to tell, other than that now superheroes come in more shades than the four colors of classical comic books.

A version of this review will appear in print in a future issue of IJOCA.

Posted by Mike Rhode at 2:29 PM No comments: