Exhibit Review: Batman exhibits at the Society of Illustrators in New York City

(all photographs are courtesy of the Society’s Flickr page at <https://www.flickr.com/photos/societyillustrators/albums/72157709277832053> 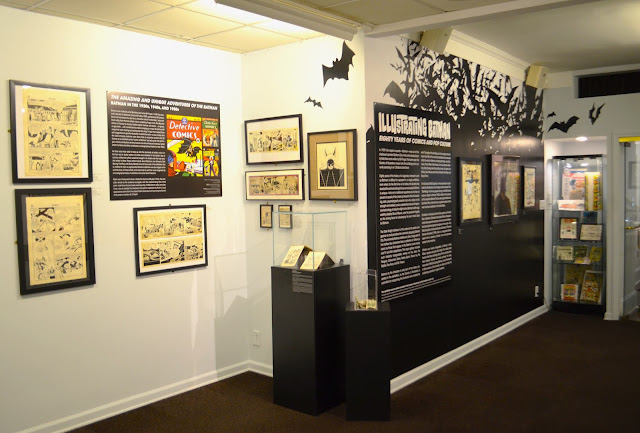 In honor of the 80th anniversary of the creation of Batman, the Society of Illustrators is currently hosting four exhibits about his comics history, with the three major ones co-curated by Rob Pistella and John Lind.

As the opening panel of the exhibit group points out, the eightieth anniversary of Batman’s creation happens to coincide with the eightieth anniversary of the Society of Illustrators moving into its current location on the Upper East Side of Manhattan, making the venue an even more relevant location for these exhibits. Needless to say, after so many years, Batman and his many allies and adversaries have gone through many transformations. Though not all of them are represented in these exhibits, there are a diverse assortment of Batman items on display from a number of collectors’ collections, ranging from comic strips, to examples of Batman-themed toys. At the heart of all of the exhibits, however, is a focus on the illustrations that have brought the world of Batman to life over the last eighty years, which means that visitors will see an assortment of interpretations of Batman and his world. In fact, works by more than four dozen artists are featured throughout the exhibits which helps to offer a crash course in the history of the character around the world. 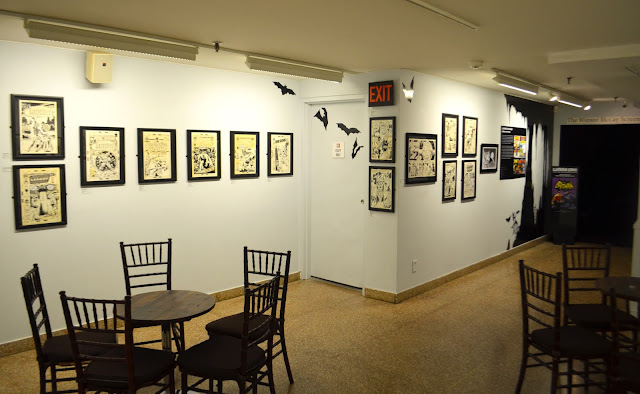 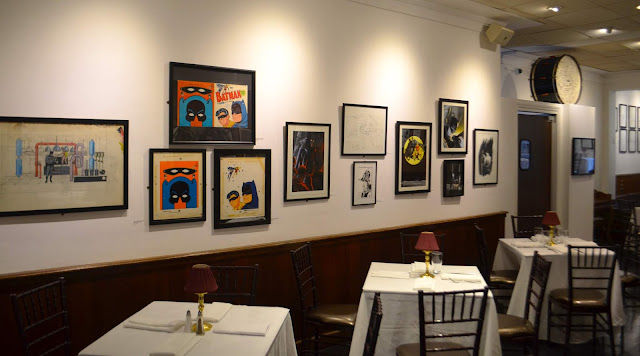 The largest of these exhibits is Illustrating Batman: Eighty Years of Comics and Pop Culture, which extends across two galleries and floors in the museum. The primary focus of this exhibit is original art from the comics with a particular focus on cover art, but this is far from all that is on display. There are a few cases showing examples of Batman products from comic books to Nabisco Shredded Wheat packages with Batman and Robin on them. Illustrated works dominate in the exhibit, although the 1960’s live action Batman television show is playing in the museum’s theater space to offer context for Batman’s visual style during this period. Though not the centerpiece of the exhibit, these products and the video installation show the widespread cultural impact that Batman and his friends (and enemies) have had in the decades since his creation.

The comic art that is on display spans much of Batman’s history, with several items devoted to his creation. The exhibit does a very nice job of explaining the character’s origin, including the reason that Bob Kane initially received sole credit for the character, Bill Finger’s contributions, and the important work of other artists during the early years of the character’s development. It includes not only finished artwork, but also some evidence of the artistic process, such as two sketchbooks kept by Lew Sayre Schwartz during his time working on Batman comics in the late 1940’s to 1950’s. Some examples of newspaper comic strips are also included in the exhibit to represent the early years. This exhibit offers background on all of the important periods in Batman’s history and an assortment of examples of art from each as well. As such, it is a good introduction to the development of this important character, though it may not offer much that is new for those with serious Batman knowledge. 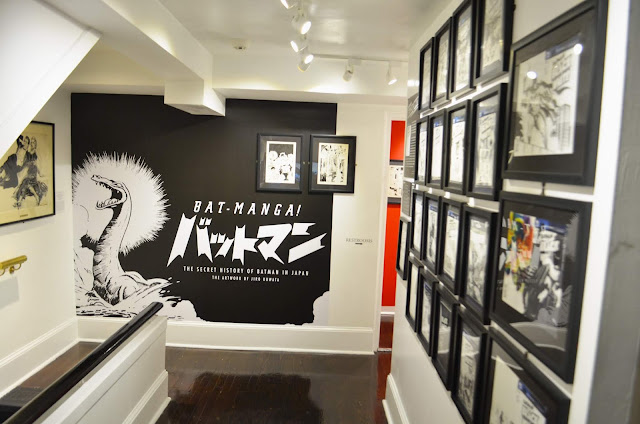 Bat-Manga!: The Secret History of Batman in Japan is focused on Jiro Kuwata’s artwork for a manga version of Batman, which was published in Japan beginning in 1966. Created at a point when Batman was extremely popular in Japan, the manga was not long-lived, but does offer a glimpse into a Japanese interpretation of the character. The original art from the manga shows how Kuwata developed his own style for both Batman and Robin and brought them into a manga universe. While this is a fairly small exhibit, the interpretive text notes that it includes many pieces of original art that have not previously appeared in the U.S. The pieces displayed feature full pages from the comic, allowing viewers to get a sense of the way the story moves from panel to panel and also offers ample opportunities to see how this manga combines traditional Batman elements with Japanese stylistic elements from the time. It is a great introduction to a piece of Batman’s history that many fans may not know much about. However, the gallery in which the works are displayed is the smallest of all of the exhibits, making the experience of viewing the works feel a bit cramped. 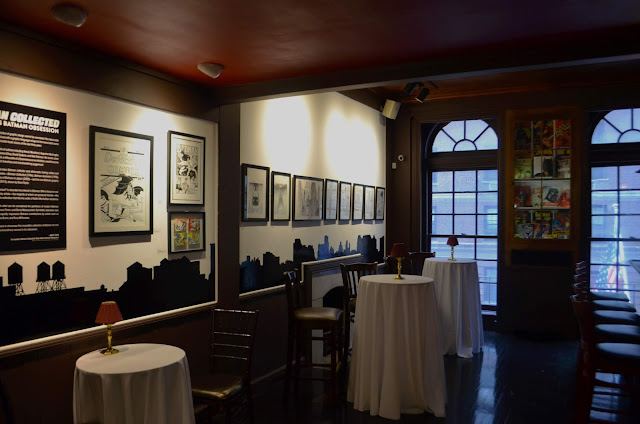 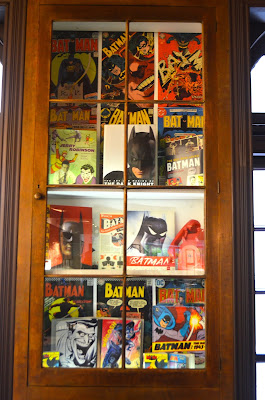 Working with book designer and author Chip Kidd, the museum has also curated an exhibit entitled Batman Collected: Chip Kidd’s Batman Obsession, which showcases items from his personal collection of Batman art. This is the exhibit that is likely to have the most surprises for even serious Batman experts because it includes several works that Kidd has personally commissioned and pieces that have been personalized for him by Batman artists that he knows. He has art by artists of well-known Batman works, such as Frank Miller, Dave Taylor, and Alex Ross, as well as some by less expected artists such as alternative cartoonists Chris Ware and Daniel Clowes. His interesting collection is a mix of examples of Batman in products, including a 1966 ad for All Star Dairies’ Dairy Chocolate featuring Batman, a Batman board game from Japan, at least one rejected cover illustration, and sequences of original art for multiple pages of a single issue.

In addition to these three exhibits, the museum also has a display entitled Batman: Black and White <https://www.societyillustrators.org/exhibits/batman-black-and-white>, which showcases several examples of original cover art that Chip Kidd commissioned artists to draw on blank covers of the Batman: Black and White comic. Though Kidd owns over 100 of these works in total, only a selection are on display on the second floor landing, but they offer an opportunity to see Batman as interpreted by a wide range of artists in a diverse set of styles, including examples by Roz Chast, Peter de Sève, Jaime Herandez, Liniers, and Anders Nielsen to name just a selection. These offer a fun look at Batman through the lens of very different art styles, making it a highlight of the exhibit series. 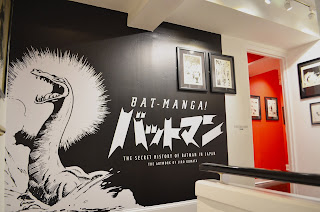 One thing that this trio of exhibitions does very well is showing Batman in many different styles and at virtually every point in his history. The exhibits also showcase a range of pieces that are held by private collectors and therefore rarely seen in some cases. Taken together, the exhibits will offer something new for all but the most knowledgeable of Batman followers, making them worth a visit for any fan or scholar. The three exhibits will be on display until October 12, 2019 at the Society of Illustrators’ Museum of Illustration.

(This review was written for the International Journal of Comic Art 21:1, but this version appeared on the IJOCA blog on July 2, 2019, while the exhibit is still open for viewing.)
Posted by Mike Rhode at 9:10 AM No comments: