Book Review - Pearl Jam: Art of Do the Evolution 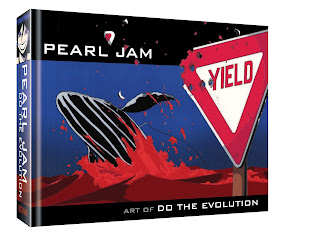 Reviewed by Cord A. Scott, UMGC-Korea

Media often influence other forms of entertainment in unexpected ways.  People get ideas from one kind, such as film, and after a creation of something monumental may influence other media, such as music videos.  If something is truly effective, it will evoke both homages as well as parodies.  An animated video was produced to accompany the Pearl Jam song “Do the Evolution” from the album Yield, and its impact has been long lasting.  It was the creative process for the video, and its later influence, that is the subject of the book The Art of Do the Evolution published by IDW Publishing (which was reviewed as an incomplete advance copy).

Pearson’s chapters go into the creative process, as well as the production of the video, and finally the editing and resulting corporate censorship process. He also uses production notes, and interviews with the principle players to show the overall impact of the video. 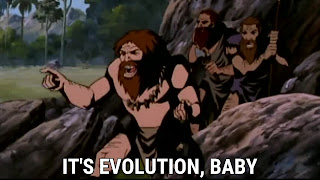 The song was inspired by the book Ishmael by Daniel Quinn. The premise of the story was a discussion of humanity between a man and an ape named Ishmael, with the ape serving as a Socrates-like figure who notes that humanity has developed along two different tracks: the Leavers, who live closer to nature, and the Takers, who are slowly destroying everything through their own greed.  These story points in Ishmael also figured into the animated music video.

One of the more interesting aspects of Pearson’s book was his look at how the video came about.  Eddie Vedder wrote the song, but also edited his own homemade video of the song by using the images from Todd McFarlane’s animated adaptation of the comic book Spawn.  This series, which ran on HBO, was far darker and more violent than a standard cartoon and Vedder liked the raw intensity of combining the images and the song. This rough video became the base from which the creative process of the finished video began. 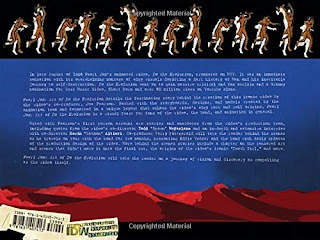 When the video first aired in September of 1998, it was a sensation for a variety of reasons. Simply put, it was called “A four-minute history of mankind for stoners.” (p. 137) While the video may have appeared as a forceful depiction of evolution, the imagery was far more nuanced if one scrutinized it. The video is already striking, but there are even more details when one looks closely into it and this book allows that.

As a continuing theme of the book, the artwork executed under the guidance of Epoch Studios was also a change from the norm.  One aspect of this change was the mixing of animation styles. Jim Mitchell trained in the Disney studio style. Brad Coombs was from the intermediary realm of Tim Burton-style animation, which used both traditional drawings as well as stop-action models. The Japanese animation of Hiyao Miyazaki, as well as the overall style of Japanese and Korean anime, influenced Kalvin Lee, who was the final part of the creative team.  These artists all merged their talents into the production process. By utilizing a series of styles from all the forms, and by using other short cuts, they were able to meet their twelve-week deadline from concept to broadcast. 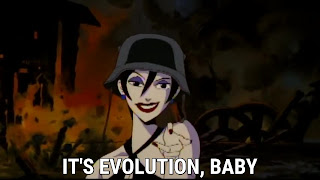 A substantial part of the book centers on the sketches of the storyboards and how these initial images developed into the final product.  These creative decisions also influenced the development of the video, through the character of the “death girl.”  This character was inspired by the character “Death” from Neil Gaiman’s comic book Sandman, as well as Spawn’s wife in the HBO cartoon.

What was of far more interest to me was how the various forces, such as MTV or the Sony record label wanted alterations of the images.  While some symbols were changed, such as the swastikas from the Nazi soldiers, or the American markings on a strafing aircraft, other images were found to be too disturbing and were therefore removed completely.  The most significant of these was the image of barbarians destroying a bust of a Roman leader.

What remained even after the corporate censors went through the video was both surprising and curious.  Much of the discussion between the creators centered on the “trailer trash man” watching acts of sexual violence in a virtual reality mode.  As he watches the violence, he squeezes his beer, simulating sexual release.  That this sequence remained in was rather surprising to the creative staff.  The other moment was at the very end, where the screen went black and all that was heard was a cricket chirping.  MTV had a policy of never allowing black screens, but it remained. This simple ending acts to recall the cycle of life. 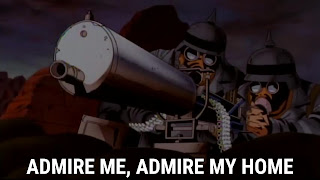 The video has had an impact on both the music video industry while also inspiring a wide variety of imitations and admirers.  The animators of the Simpsons took the video and turned it into one of their opening sequence gags with a similar, toned-down version of the song to accompany it.

Overall, the strength of the book is that it shows how the creative process was an interactive one, especially at a time when the industry was still “evolving” (pun intended).  At the same time, it also demonstrated how Eddie Vedder was far more creative, and knowledgeable, of the video editing process than many may assume.  His singular vision and final cut control were also factors that ensured the desired outcome.

While the book was interesting, there were some issues such as some of the stories being repetitive. Granted, they were from the different creators involved, but tighter editing would have helped. For me, the same issue was the use of storyboards and sketches which were interesting, but redundant after a while. Too many of them seemed repetitive.

In all, the intersection of so many media and influences (music, videos to accompany music, comic books, cartoons, etc.) shows how the process of this short film is itself a type of evolution.  Ultimately, that is a hopeful idea of humanity, as well as the goal of Vedder and all those involved in the creative process.

Posted by Mike Rhode at 7:59 PM No comments: 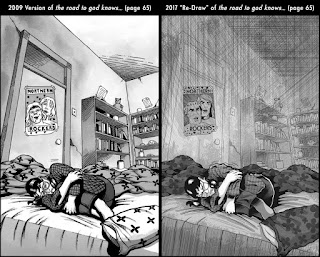 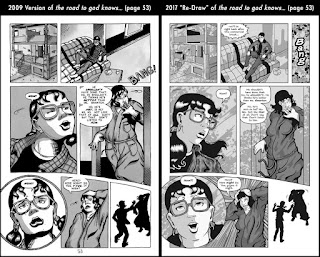 Posted by Mike Rhode at 7:58 PM No comments: