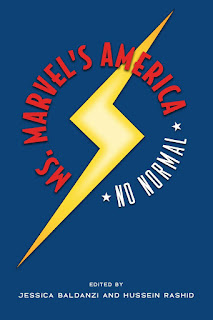 While Kamala Khan first appeared in the background of a panel in Captain Marvel #14, she formally debuted on the last page of Captain Marvel #17 in November 2013, with the writer hinting that the second-generation Pakistani immigrant, Muslim-American teenager from Jersey City would become the next Ms. Marvel. In February 2014, Khan became the latest Ms. Marvel, also becoming, as Jessica Baldanzi and Hussein Rashid note, "the first Muslim superhero to headline her own series" (vii). Khan, created by editor Sana Amanat and writer G. Willow Wilson, is more than a "Muslim superhero" as she does not embody one, monolithic identity. As Sika A. Dagbovie-Mullins and Eric Berlatsky point out in "'The Only Nerdy Pakistani-American-Slash-Inhuman in the Entire Series': Postracialism and Politics in the New Ms. Marvel," Khan "is American and Pakistani, human and Inhuman, brown and white," and I would add a teenager, a comics' culture fan, a video game fan, and more (66).

Baldanzi and Rashid's Ms. Marvel's America: No Normal serves as the first scholarly volume on Khan, collecting essays from scholars in various disciplines. While Baldanzi and Rashid mainly focus the scope of the collection on Ms. Marvel's first volume, issues #1-19, the editors provide readers with a wide range of articles that examine everything from the troubled publication history of Khan's predecessor Carol Danvers, to discussions of identity and politics within the series, to insights into using Ms. Marvel in the classroom, to the atypical fandom surrounding Khan. In this manner, the collection serves as a starting point for numerous discussions surrounding Khan in relation to the comics' industry, teaching, activism, fandom, and more.

The first section, "Precursors," contains two essays which examine two of the most prominent forerunners to Khan: Carol Danvers and Dust (Sooraya Qadir). In "Mentoring Ms. Marvel: Marvel's Khan and the Reconstitution of Carol Danvers," J. Richard Stevens looks at Danvers' publication history and the lead up to Khan's appearance in Ms. Marvel where she receives the superhero mantle from Danvers. Stevens dives into Danvers' source texts, pointing out that while she became a symbol of feminism as a female superhero in the male Captain Marvel's 1960s series, "her role in the series was to serve as a damsel in distress for Captain Marvel" before she received her superpowers and her own Ms. Marvel series in the late 1970s (7). With her series cancelled, she was arguably raped while part of the Avengers and written out of the team. Upon her reintroduction as Captain Marvel in 2012 and the subsequent creation of Khan, Danvers became a mentor to the teenage hero, bringing an "interaction between second-wave feminism and post-feminism" to the series, even though as Stevens argues, the positioning makes her "less relevant to the concerns of millennials" (17). Martin Lund's contribution examines the representation of both the X-Man Dust and Khan within "superhero comics [which] use space to frame issues of identity and belonging," specifically following 9/11 (22). Lund emphasizes that out of her one hundred and twenty-two appearances, Dust only speaks in sixty-eight of them and plays a leading role in three issues. Lund focuses on issues where she speaks, and he details how Dust merely exists and "functions strictly as an Other," playing into readers' preconceived notions about Muslim men and women (28). With Khan, he argues focus is on "to what extent and how she negotiates a sense of cultural citizenship that is both flexible and multicultural" instead of the question of whether or not she belongs (31). Ultimately, Khan's position as both an outsider and someone who feels at home in Jersey City makes her relatable to readers, and it also underscores the internal struggles she has with her own identity as a teenage girl, Pakistani-American, Muslim, daughter, and superhero.

The essays in "Nation and Religion, Identity and Community" present varying, and differing, examinations of the ways that Khan and Ms. Marvel navigate the community and setting in which she exists.  Focusing on the multiple identities and spaces that Khan occupies and navigates, Hussein Rashid's "Ms. Marvel is an Immigrant" argues that we need to look at the ways that Khan, not Ms. Marvel, traverses and engages with the multiple pulls in her life, and in this manner "we can more clearly see how the hybridity process functions and the changes it makes" (48). Throughout the essay, Rashid shows that we do not need to read Khan "as a Muslim superhero" because reading her narrative in this manner "flattens her character and misses the ways in which she is doing important cultural work"; rather, we need to think about Khan "as a superhero who is Muslim" (61). David Lewis' "Hope and the Sa'a of Ms Marvel" explores the ways that Islam influences Khan's narrative and works in conjunction with her identity and community within the narrative. Lewis argues that these connections showcase that "Khan's religious identity is not peripheral to her mission as a superhero; it is quietly integral" (126). It is central because it informs her reaction to the apocalyptic events outside of her control and the ways that she works to save her community in Jersey City, even as New York and other areas encounter the same destructive forces.

In their essay, Dagbovie-Mullins and Berlatsky examine the ways that Ms. Marvel exists as the product of large corporations who value the bottom line more than they value true diversity; as such, while Khan and the series presents positive diverse narratives, "it is also important to acknowledge the limits of the post-racialist discourse in which it partakes" (84). These limits cause the series to be more apolitical and assimilationist instead of speaking to national and global politics.  Jessica Baldanzi's "'I Would Rather Be a Cyborg': Both/And Technoculture and the New Ms. Marvel" looks at Dana Haraway's 1984 "Cyborg Manifesto" in relation to Ms. Marvel. Ultimately, Baldanzi argues that through interrogating discussions and terms used to describe technoculture Ms. Marvel "find[s] interconnections rather than divisions" that point to the work that we still have to do (110).

Building upon the previous section, the essays in "Pedagogy and Resistance" draw attention to the impact that Khan has within the classroom on students in the real-world, not just within the pages of Ms. Marvel. Drawing on the critical pedagogy of Paulo Freire and on critical race theorists such as Mari Matsuda and bell hooks, Peter Carlson and Antero Garcia's "The Transformational Resistance of Ms. Marvel in America" shows the ways that "Khan's civic voice and agency are intertwined with her personal identity; her growing, adolescent sense of self; and her initially conflicted feelings about how her superpowers are presented" (134).  By tracing Khan's movement towards transformational resistance throughout the series, Carlson and Garcia point out how the series helps students, especially students of color, explore and come into their own civic voices and duties.

In "'Classroom Heroes': Ms. Marvel and Feminist, Antiracist Pedagogy," Winona Landis looks at the ways that Ms. Marvel works in the classroom as "a feminist, anti-racist pedagogical tool" (154). Landis does this by highlighting the ways that she incorporates Ms. Marvel into her classes and the ways that students respond to Khan and other characters within the text. While she does, as others do throughout the collection, note some of the problems with Ms. Marvel, Landis points out that "it is the nuance and imperfection therein that allows this comic . . . to reach wide audiences and to affect students in noteworthy and powerful ways" (167). Kristin Petersen's contribution showcases the ways that Khan's fashion functions a visual form of resistance, specifically by tracing Khan's costume from the un-pc costume that Carol Danvers originally wore to the more conservative Ms. Marvel costume which she fashions out of her burkini, leggings, and sweatshirt. Khan's costume and fashion works to "visually demonstrate that the intersection of cultural values that Ms. Marvel represents are essential to American culture" (185).

The fourth section examines comics fandom and Aaron Kashtan's and Nicholaus Pumphrey's essays each challenge the narrative of comic fans solely consisting of male fans who constantly resist change. Kashtan highlights Khan's own fandom of comics and shows how as a fangirl "Khan demonstrates that comics are not the exclusive property of white male fanboys, and that traditional comics fandom is not the only way to be a fan" (192). Kashtan details the ways that Khan positions herself as a fan of comics, science fiction, video games, and more; he shows how she navigates these spaces as well, engaging in massively multiplayer online role playing games and writing fan fiction about her favorite superheroes. In all of these endeavors, Khan counters earlier depictions of fandom in comics through "her creative (or 'transformative') fan practices and because her fandom is presented in a generally positive light" (197). Pumphrey continues Kashtan's exploration by looking at "the racist and sexist commentary from white male fans" to the introductions of Miles Morales and Khan to the Marvel Universe (207). Pumphrey presents statistical evidence highlighting the misnomer of comics' fans as "fanboys," and he argues that calls for continuity in comics "preserves the institutionalized racism of the 1960s" (215). At its core, Pumphrey's essay explores the tensions between fans' reactions, comics company's bottom lines and marketing strategies, and the growing need for "diverse representation" in the medium (221). In this manner, Pumphrey points out that while Morales, Khan, and other characters present diversity, the continued presence of "the fanboys of yesterday" push back, and in order to move forward "diverse representation needs to be mandatory and widespread from the top down."

Overall, the collection presents a wide range of examinations of Ms. Marvel. In this manner, the essays provide ways to look at Kamala Khan and the series while the last two parts of the collection present teachers with ways to incorporate Ms. Marvel into the classroom and challenge the still-prevailing myth of comic book readers as solely white males. At the end of the collection, Shabana Mir's interview with G. Willow Wilson touches on the themes that the essays in the collection explore. Along with this, the "Coda" contains an a single-panel piece by José Alaniz that encapsulates the importance of Khan through the anecdote he shared of encountering Madia, a deaf teenager from Somalia, who tapped Alaniz on the shoulder as he read Ms. Marvel and told him, "That girl is me."

A version of this review will appear in print in IJOCA 22:2.

Posted by Mike Rhode at 2:52 PM No comments: