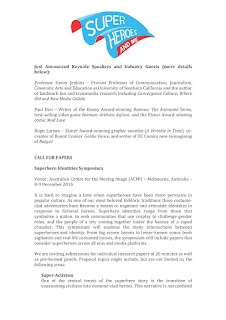 Professor Henry Jenkins – Provost Professor of Communication, Journalism, Cinematic Arts and Education at University of Southern California and the author of landmark fan and transmedia research including Convergence Culture: Where Old and New Media Collide

It is hard to imagine a time when superheroes have been more pervasive in popular culture. As one of our most beloved folkloric traditions these costume-clad adventurers have become a means to negotiate and articulate identities in response to fictional heroes. Superhero identities range from those that symbolise a nation, to web communities that use cosplay to challenge gender roles, and the people of a city coming together under the banner of a caped crusader. This symposium will examine the many intersections between superheroes and identity. From big screen heroes to lesser-known comic book vigilantes and real-life costumed heroes, the symposium will include papers that consider superheroes across all eras and media platforms

We are inviting submissions for individual research papers of 20 minutes as well as pre-formed panels. Proposal topics might include, but are not limited to, the following areas:

One of the central tenets of the superhero story is the transition of unassuming civilians into costume-clad heroes. This narrative is not confined to the comic book page as the people of San Francisco demonstrated when they came together to realise the adventures of Batkid. Proposals are invited that consider how superheroes have become icons of activism and community engagement.

Comic books are often considered an American form, and the medium's most popular character, the superhero, did much to affirm that link with dozens of star-spangled heroes created during the industry's Golden Age. However, the superhero has been reimagined in a range of contexts to respond to local cultures, politics, and traditions. Papers that consider how superheroes engage with national and regional identities are welcome.

The masquerade and imaginative possibilities of superheroes, coupled with their high concept settings, have allowed these characters to engage with issues and interests that were often difficult to tackle in more "grounded" stories. Papers that consider how superheroes address topics such as gender, sexuality, and ethnicity are invited.

Whether it is t-shirts adorned with a familiar logo or convention cosplay and fan fiction, superheroes compel participation. We encourage papers that examine the range of this engagement from casual movie audiences to avid consumers.

The supervillain is often understood as the hero's dark double. This symposium welcomes papers that consider the identities of the supervillains, and their relationship to the above topics.

Proposals of 250-300 words for individual presentations or full panels, as well as any queries, should be sent to wburke@swin.edu.au by June 24, 2016, along with a 150-word bio.

Henry Jenkins joined USC from the Massachusetts Institute of Technology, where he was Peter de Florez Professor in the Humanities. He directed MIT's Comparative Media Studies graduate degree program from 1993-2009, setting an innovative research agenda during a time of fundamental change in communication, journalism and entertainment.

As one of the first media scholars to chart the changing role of the audience in an environment of increasingly pervasive digital content, Jenkins has been at the forefront of understanding the effects of participatory media on society, politics and culture. His research gives key insights to the success of social-networking websites, networked computer games, online fan communities and other advocacy organizations, and emerging news media outlets.

Paul Dini is the Emmy, Eisner, and Annie Award-winning writer of some of the most popular superhero stories ever across animation, film, comics, and games. He is co-creator of the Batman: The Animated Series and related shows and films Batman: Mask of the Phantasm, Superman: The Animated Series, and Batman Beyond. While working on Batman, Dini co-created fan favourite character Harley Quinn who makes her film debut in August's Suicide Squad. Moving to games, Dini is the writer of the best-selling Batman: Arkham Asylum game.

His 2016 graphic novel Dark Night: A True Batman Story is a harrowing and eloquent autobiographical tale of Dini's courageous struggle to overcome a desperate situation.

In addition to her comics work, Larson has explored filmmaking. She is the writer and director of two short projects. Bitter Orange, starring Brie Larson, James Urbaniak and Brendan Hines, is a tale of crime in 1920s Hollywood. Did We Live Too Fast is a Twilight Zone-inspired music video created for Mary Elizabeth Winstead and Dan the Automator's band, Got A Girl; it was used as the centerpiece of their 2015 tour.

Larson has been nominated for cartooning awards in the US, Canada and Europe, and is the recipient of a two Eisner Awards and an Ignatz. She holds a BFA from the School of the Art Institute of Chicago. She currently lives in Los Angeles.