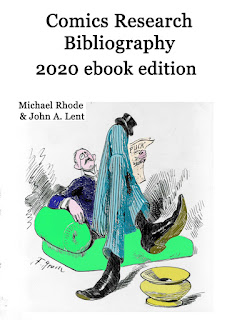 For many years, John Lent and Mike Rhode have been collecting citations for comic art, and putting them out in various ways, most recently through a Facebook page. For 2020, they have decided to try to begin bi-annual electronic updated versions.
Over 1200 pages long with more than 1200 new entries, this is a bibliography of articles and books on all aspects of comic and cartoon art including comic books, comic strips, cartoons, animation, editorial cartoons, newly updated as of the end of 2018. The electronic book, a non DRM PDF, includes tens of thousands of citations with links to information on comic book movies, the Charlie Hebdo massacre, the Danish Islam cartoon controversy and other topical matters (but not COVID-19 which will be in the next edition). Many citations are hot-linked to the web publication for ease of use.
To order, please Paypal $12 to mrhode@gmail.com and be sure to include your email, and a link to download the pdf will be emailed to you. For students or others, email Rhode directly if you need to request a reduced price.
Sample entries -

An explanatory note about the project from the book's introduction -
The Comics Research Bibliography began as an online resource in 1996. John Bullough, struck by the success of the Grand Comics Database crowd-sourcing project, proposed a companion project of a compilation of works about comics. Michael Rhode was the only member to join him in compiling an online Comics Research Bibliography. Bullough selected a citation format and created a web interface hosted on his school's server. We both contributed citations, from our local newspapers and collections, especially from Rhode's books and magazines. In the early days of the Internet, we were unaware of John Lent's similar project which he had started for an academic publisher. Both online library catalogues and booksellers have made it less necessary to have an author's books listed, but it seemed silly to have reviews of the books and not the citation for the book itself, so collections of comics were added fairly early in the project. Since updates to the online version have stopped, Rhode has decided to produce a semi-annual print and electronic version to fill the gap. He and Lent began working together on the International Journal of Comic Art over a decade ago, and at the conclusion of Lent's publishing contract, began sharing bibliographic data. Three previous print editions appeared as Volume 11, Number 3 of International Journal of Comic Art (626 pages), Comics Research Bibliography, 2012 (two volumes, 832 pp.) and CRB, 2018 (two volumes, 1253 pp.). This bibliography is a continual work in progress – the authors literally have thousands of additional citations waiting to be formatted and included. Many new articles have appeared due to the growing acceptance of comic art as a subject of interest at the same time the Internet has become a mass publishing media. As the years passed, and the Internet expanded, online citations grew far more rapidly than print ones. We are trying to be a quality filter by only grabbing substantive articles, or interviews off the web. If one types 'Fantagraphics' into Google's search engine, one million results are returned, but if you look at the Fantagraphics entry here, hopefully we will have some substantive pieces on the company that will be useful for research. A word of caution – this bibliography is best used in conjunction with Lent's 10-volume set of Comic Art Bibliography, Rhode & Bullough's online Comics Research Bibliography at  http://www.rpi.edu/~bulloj/comxbib.html (for not all citations there have been added here yet), Joachim Trinkwitz's Bonn Online Bibliography of Comics Research at https://www.bobc.uni-bonn.de/ , and Randy Scott's Index to and List of the Comic Art Collection at http://comics.lib.msu.edu/ . It is neither feasible nor possible to duplicate efforts, and it would not be desirable either, as we all work together and have helped each other.
Posted by Mike Rhode at 8:59 AM 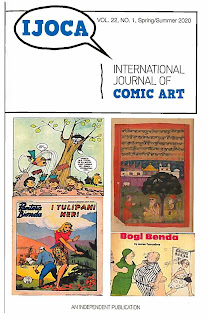