Book Review - Red Lines: Political Cartoons and the Struggle Against Censorship, by George and Liew 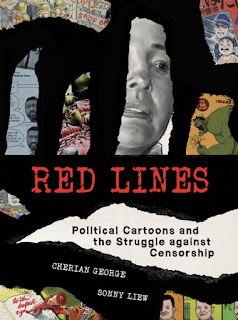 Red Lines surveys “21st century restrictions on freedom of expression as experienced by political cartoonists around the world.” The most dramatic cases are of cartoonists who have been assassinated; abducted and presumed killed; arrested and died in custody; assaulted; jailed; threatened; sued; fired; or were forced into exile. In addition to presenting their stories, the authors describe the very ordinary, market-based pressures which result in dissenting cartoons playing a much smaller role than they could in the liberal democracies of the West.

The co-authors briefly include their own backgrounds. Cherian George had served for a few years in the 1990s as art and photo editor of the largest newspaper in Singapore, and Sonny Liew created a rightly-celebrated graphic novel about Singapore’s history. Unlike other nations with strong economies, Singapore lacks press freedom. Liew was responsible for the “scrappy,” very visual treatment of the text, and also contributed portraits of several of the cartoonists.

Their book’s scope is truly global, with examples from more than sixty nations. They thank such people as the supremely well-connected John Lent, the activist organization Cartoonists Rights Network International, Daryl Cagle, and others for their help in making this possible. For Red Lines, they interviewed over five dozen cartoonists from six continents, and they cite scholarly material from over 200 published sources (all in English.)

The idea of a “political cartoon” has no clear boundaries. For this project, George and Liew define “political cartooning” quickly and simply as “drawn commentary on current affairs.” They also include some examples from “the associated arts of caricature, comic strips, memes, and graphic novels.” Although clearly tangential to the kind of work that they love, the co-authors admit that memes have become “the most prevalent genre of political cartooning today” and credit memes for introducing a more participatory and engaging way of distributing messages (though through a medium, the internet, which has the potential to become the most fully regulated space ever known.)

The political cartoons that seem closest to the heart of their project could be described more narrowly as single-panel, satirical drawings, published for a mass audience in a newspaper or magazine or posted on the web, which denounce a leader’s wrongdoing and for which the cartoonists paid a penalty. Even using this more restrictive definition, one book could not include every 21st century cartoonist who has encountered serious limits to their artistic freedom.

Red Lines’ chapter on “The Boys’ Club” notes that “Traditional studies of censorship didn’t explore the gender dimension.” Ironically, even in studies of how various voices have been silenced, those “silences resulting from sexual discrimination were often ignored.” Once the issue has been raised, it becomes evident that “gender-based censorship” exists “everywhere” and that gender-based hierarchy and oppression rely on this.

Red Lines discusses several extreme examples of gender-based censorship, including the persecution of Iranian cartoonist Atena Farghadani. Her cartoon mocking legislators who had passed a sexist law led to Farghadani receiving a prison sentence of 12 years. (She served two years before being released because of international pressure.) In the United States, some women cartoonists are silenced by the more everyday means of online harassment, which can create what Anita Sarkeesian calls an environment “too toxic and hostile to endure.”

The focus on 21st century examples keeps the book feeling current and fresh, but the authors also include some well-chosen historical examples for context, particularly in their chapter on racist cartoons. As George and Liew acknowledge, in the battles to promote full rights and respect for the dignity of all groups of people, some cartoonists have taken one side in these conflicts while some cartoonists have worked on the other opposing side.

In addition to the brutal older methods of state repression and the quieter and more effective methods of economic strangulation, increasingly the pressure on cartoonists comes from mob action, either in person or, more commonly, on the web. Internet responses to provocative cartoons can serve positive ends. George and Liew credit such criticism for sometimes helping cartoonists learn to avoid committing unintended offenses with lazy stereotypes, and for contributing to the evolution of society.

Not all complaints, though, are well-founded or made in good faith. Sometimes political entrepreneurs strategically take offense, manufacture outrage and perform victimhood to advance a political cause. Cartoonists are sometimes caught in the crossfire of “proxy battles” in larger cultural wars. The rhetoric of “victimhood” has been used both by discriminated-against minorities and by majoritarian nationalists. Red Lines advises cartoonists to learn to tell the difference “between surrendering to a mob and adapting one’s work in solidarity with the oppressed.” The simple rule of “punching up and not kicking down,” though, becomes complicated partly because people disagree on which direction is up. For example, Red Lines asks: “Are cartoons about Muslims and terrorism punching up at a global movement of extremists […] or kicking down at marginalized Muslim minorities in the West?”

The long, penultimate chapter focuses on the massacre of the Charlie Hebdo cartoonists in Paris in 2015. The chapter (while, of course, never condoning the crime) analyzes the offending cartoons from multiple perspectives, and then rather than surrendering to “the Rashomon effect,” intentionally “privileges the perspective of the cartoonists at the center of the controversy.” By this, they mean that they trace the previous decade’s most immediately-relevant events that had led up to their deaths. The book does not simplistically deify the murdered artists as noble martyrs to high principles. The final word goes to a surviving Charlie Hebdo cartoonist, “Luz,” who says “The simple fact is that our friends died.”

Red Lines’ perspective seems more multinational than international, emphasizing each cartoonist’s situation largely within his or her own national context. Several of the nations in which cartoonists have suffered repression have been targets of the US government’s ongoing attempts to weaken their regimes or overthrow their leaders, including Nicaragua, Venezuela, Syria, Cuba, China, and Iran. Nothing brings out the censors like a state of war, and, it would have been appropriate to add, this also applies in nations bedeviled by the CIA’s undeclared wars and the US Treasury Department’s sanctions.  (Possibly no recent study has been written that focuses directly on the historic roles of editorial cartooning in international propaganda campaigns, psychological warfare operations, and destabilization efforts.)

Given recent developments (with most jobs for professional, full-time staff cartoonists still disappearing rapidly), when the authors struggle to end on a hopeful note, they conclude simply that cartooning will not die. Political cartoonists who follow current affairs closely, demonstrate artistic skill, and seek to contribute to civic engagement will continue to struggle onward. Students and others who wish to support those struggles can find in this attractive volume a welcome, wide-ranging and nuanced introduction to the issue of cartoon censorship.

A version of this review will appear in print in IJOCA 24-1.