Book review: The Mud and the Mirth; Marine Cartoonists in World War I by Cord Scott 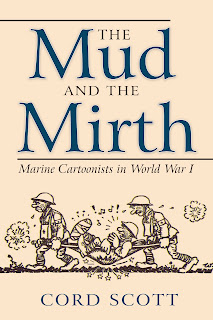 This is the Marine Corps University Press’ first book of comics analysis and criticism, focused on the pre-first world war and wartime cartoons published by - and about - the Corps. Available for free as a .pdf, the Press show an admirable commitment to public-facing history with the publication of a wide assortment of archived cartoons. It’s a lavishly illustrated monograph, featuring over a hundred full color and black and white images, many of which are made widely available here for the first time.

Scott begins his analysis of military cartooning with an interesting point of departure from typical approaches. He notes that analysis of wartime cartoons usually begins with the patriotic commercial comic books, propaganda, and cartoons of World War II. Indeed, this is where Scott himself began his earlier work, Comics and Conflict, which looked at military cartoons from WWII through to the War in Iraq. In The Mud and the Mirth, however, Scott looks backwards, making a case that the cartoons and imagery published between 1914 and 1918 are part of a longer continuity. He argues that this framework allows readers to observe the “succession of cartoons that told of the Marines’ life well after World War I, into WWII, Korea, and even to the present day.” (4) The cartoonists, publications, and illustrations of the Marine Corps during this period laid the foundation for future military cartoons and comics. These materials are often neglected, to the detriment of broader conversations about military cartooning, wartime propaganda, and explorations of the Marine Corps’ internal culture. Likewise, Scott suggests, the authors and artists who created the sequential strips of the in-house publications have largely been overlooked both by historians of the Corps, and those focused on the development of sequential mediums and comics.

The Mud and The Mirth is structured around the Marine Corp’s pre-war and wartime publications. Scott first addresses pre-war depictions of the Marine Corps in the internal magazines Recruiters Bulletin and the Marines Magazine. These in-house publications specifically addressed the roles and daily lives of Marines stationed around the world. Scott acknowledges the influence of these early publications on crafting imagery that would continue to define the Corps going forward. However, the focus of the book is primarily placed on the cartoons of Stars and Stripes. Over two thirds of the book’s content – and the vast majority of the images contained within – cover the artists and cartoons of Stars and Stripes, published by the Army, but a multi-service newspaper.

These sections are illuminating. Almost all of Pvt. Abian A. “Wally” Wallgren’s Stars and Stripes cartoons (in the Army newspaper) are reprinted,* including all of those from the magazine’s page seven which was most commonly used for the Marine’s illustrations. Wallgren was one of the two people of the newspaper’s art department. Scott explicitly makes the case that the work of these servicemen artists demands further research and analysis. The books greatest triumph, then, is how it skillfully opens up the Marine Corps’ archives for further study. Images from Stars and Stripes, Recruiters Bulletin and Marines Magazine demonstrate the global reach of the Marine Corps and the wide array of activities Marines were involved in. The illustrations in Marines Magazine showing American perceptions of Haiti seem particularly significant and could easily be the main focus for an extended chapter on presentations of race in these cartoons.

Indeed, Marines Magazine and Recruiters Bulletin in particular would benefit from further analysis. While these are not Scott’s primary focus, it would have been nice to see more attention paid to the two pre-war magazines and they place they occupied in the development of military cartooning. A secondary author, or even a curated anthology, could have expanded on Scott’s argument and added deeper analysis of the Marine Corps’ cartoons of the First World War. This represents a missed opportunity from a smaller academic press. While the 20 pages Scott gives to cartoons from pre-war magazines represents almost a fifth of the total length of the monograph, it is not enough space to fully explore these in the same detail as Stars and Stripes.

Nonetheless, this is a useful and necessary correction to the established literature. Hopefully this will somewhat reorient historians of the Marine Corps as well as scholars of war comics and military cartoons. It leaves open room for new and ongoing avenues of research, and for others to take up Scott’s initial inquiries and develop his arguments further.