When Le Chat Was Put Among the Pigeons 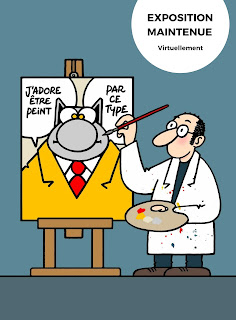 In a time of pandemic, it was no more than a fait divers on the global news cycle, but it was a fait nevertheless: the plan of the Brussels regional government to invest 9 million euros in a museum for Belgian cartoonist Philippe Geluck and his character Le Chat met with less than favorable, or at least mixed, reactions. Protest predominantly focused on the perceived lack of artistic merit in Geluck’s work and on whether the government should spend that amount on a new museum in times of Covid (while the Museum of Modern Art has been closed for more than a decade).

What is Le Chat? Why would the Brussels government want a museum for a cartoon cat? And why is everybody in the art world seemingly so set against it? Here are some thoughts from a local part-time comics journalist.

For the casual observer, Belgium’s government structure may seem like an impossible Gordian knot. We have three communities, each with their own language (Dutch, German, French) and their own governmental functions. In addition, there are two state-like regions that don’t really cover the same grounds, but also have their own governments. Then there’s the region of the capital or Brussels (with its own government) and there’s the federal government. Even I had to look it up, and I’ve lived here for more than fifty years.

Belgium likes to present itself as the cradle of European comics. Almost every sizable town has its speciality store, and comics fairs and festivals are all over. In Brussels especially you’ll bump into comics around every corner, be it in one of its several museums (including the comprehensive Comic Art Museum and the specialized Marc Sleen Museum), along the comics mural route, in galleries and art houses and in quite a lot of comics shops, both in French and Dutch (and a little English).

Even though Philippe Geluck is a cartoonist, his most important work, Le Chat, largely is not a comic strip. During its run in the Belgian newspaper Le Soir (from 1983 until 2013) his daily offering was quite often a single panel gag cartoon, with a penchant for bon mots, absurdism and self-referential jokes. Le Soir is one of the oldest newspapers in the country, and its readership is a perfect fit for Geluck’s kind of humor: respectable, highly educated, with a well-paying office job and quite progressive values, but not so much so as to ever be calling for a revolution.

Belgium may well be the birthplace of the Franco-Belgian comics tradition, but for the longest time comics were considered to be low-grade children’s fodder, whereas the single-panel cartoon was a quality cultural product for the discerning connoisseur, with international festivals in places like Knokke-Heist since the early 1960s. Think of the status of the New Yorker cartoon in the USA.

Single-panel jokes have the additional benefit that they can be easily reproduced on all kinds of merchandising products. Over the years Le chat has graced numerous post cards, napkins, badges, magnets, posters, and lately, of course, face masks. Le Chat chocolates (Les Langues du Chat) in their collectable tins are a favourite to take along when visiting friends. Les Chat and its licensing is omnipresent.

Or rather, that’s what you’d think if you visit Belgium and land in Brussels National Airport (or, conversely, if you leave the country and want a final farewell to all the riches it has to offer). If you don’t consider the ever-present Tintin for a moment (or at least try not to), you’d think that Belgium is basically Chat country.

Which it isn’t. I’d wager that if you ask any one hundred Dutch-speaking Belgians, roughly 80% would not know about Le Chat or Geluck (although they would now, after all the hullaballoo in the papers). In Brussels, the urban centers in the south of the country, and in France, they are a bona fide hit though, with more than 14 million books sold.

Because, indeed, Geluck also managed to get his cartoons collected in a long-running series of albums, published by Casterman (historically, the publisher of the more respectable clear line of bandes dessinėes, such as Tintin or Alix). From 1985 onwards, Le Chat was a recurring feature in color in the avant-garde comics monthly A Suivre (also published by Casterman) and, as with most of the more popular titles in that periodical, later collected in up-market hard cover books.

All in all, Philippe Geluck is without a doubt a very successful creator, with numerous books in various languages, radio shows and television series, awards and honorifics a-plenty, and even an asteroid named after him. He could be considered, for better or for worse, one of the most recognized Belgian authors of the past few decades.

But even while he kept quite busy with his cartoon series, stand-alone books, spin-off books and animation series, Geluck also started try his hand at a different, even more profitable business - that of fine art. Helped by specialized galleries such as Huberty-Breyne, he started doing large scale paintings with the same zany, absurdist humor and, indeed, with Le Chat.

At high-profile art events like the Brafa art fair, Geluck is present with his paintings, offered at quite hefty prices, and limited-run multiples. And he is selling – this is the kind of art that fits the office wall of an accountant who wants to be more than just a dreary functionary. It’s funny (it has an actual joke that may break the ice), it’s easy (Geluck’s art style has been called a lot of things, but never sketchy or chaotic) and it’s largely innocuous.

Halfway through the 2000s, Geluck started mentioning how Paris and other French cities had approached him with proposals for a museum of some kind for him and his creation, and culturos in the Brussels government got a tad anxious. After all, haven’t they just lost Tintin and the Hergé Museum, to Louvain-La-Neuve-Ottignies, a provincial town in French-speaking Walloon Brabant (one that, admittedly, also had a university)? Could they afford to lose Geluck as well, and to France at that?

And so, a plan was made, a site was chosen (a building that for the longest time had been empty, but that is situated on the Rue Royale, in the middle of the cultural heart of the city) and initial designs were presented to the assembled press.

After which a (small) wave of protests washed in, especially from the Brussels art world, with a petition asking why a museum dedicated to one man, a cartoonist with a simplistic style at that, was in the works, while the whole collection of the National Museum of Modern Art had been in storage for more than a decade, and while other (more serious, I gather) art was being neglected.

While all this was covered in the press and on TV, the Brussels, and Belgian, comics scene, kept strangely quiet, even though the Belgian Comics Museum had announced only two weeks earlier that it was forced to let go a third of its employees because it had attracted 70% fewer visitors due to the COVID crisis. In addition to the rent from the book store and coffee shop, tickets are the only source of income of this unique Museum.

Philippe Geluck seemed quite shocked by all the hubbub the plans for his museum had caused. During a television debate on commercial station RTL he announced that, if a better goal for the building could be found, he’d gladly step aside.

So, what to do? Perhaps turn the Rue Royal building into a modern art museum and support the already existing Comics Museum? Give Le Chat its own wing there? For the government bodies involved in the affair, nothing seems to have changed in spite of any controversy. Maybe we should simply wait a couple more years. After all, Geluck is still alive and very much kicking, while other bigwigs of the Belgian art world only got their museums long after their demises.

A version of this will be published in print in IJOCA 23-1.