Book Review: Chronicles of a Circuit Breaker by Joseph Chiang 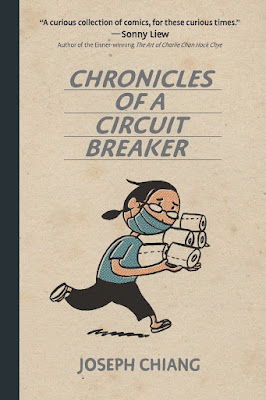 The burgeoning genre of what’s being called graphic medicine started decades ago with earnest PSA giveaway comic books on the dangers of smoking or animated military films warning about diseases such as syphilis and malaria. By 1994, Harvey Pekar and Joyce Brabner’s Our Cancer Year (illustrated by Frank Stack) set the pattern for the autobiographical account of personal suffering from disease which remains the dominant type of story. 2020 saw the genre increased by a wealth of comics in response to the COVID-19 pandemic. One of the lighter additions to these volumes is Chiang’s book collecting his webcomic, which unfortunately and undeservedly might be hard to get by most of our readers, only due to the ridiculous cost of international shipping. The production values and the care that went into it, with some strips redrawn four times and excellent computer coloring mean that the physical book is a pleasure to have. Chiang and Lim provided a copy to me for this review, but the webcomic is readable for free at https://www.josephdraws.com.

Chiang has collected his webcomic about Singapore’s struggle against COVID-19, and the government’s attempt to break the transmission of the disease via a pause in public life – a circuit breaker – from May through June 2020. “When the Circuit Breaker started, there was nothing to do for artists, which are the most non-essential workers, with no jobs, at that time I started a journal to record to the day-to-day happenings,” Chiang said in an interview with his editor CT Lim (who’s also country editor for IJOCA). His journal was written words but he would add in sketches and when the National Arts Council initiated a special COVID fund, he applied for a small grant for a digital project. While normally a print maker, he decided to turn his journal into a graphic novel, returning to the comics format he’d left about a decade ago. Due to the grant’s conditions, the comic would need to be a webcomic. Since every day was much the same, with everyone unable to leave the house, he decided to do a humorous strip. It was semi-autobiographical, not 100% true, but based on his family and what he saw on the news. “Putting myself in as a character, solved the problem of people possibly accusing me of laughing at other’s misfortunes.” 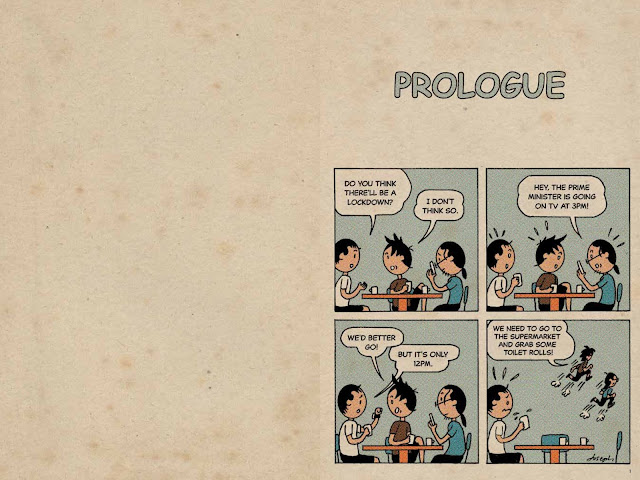 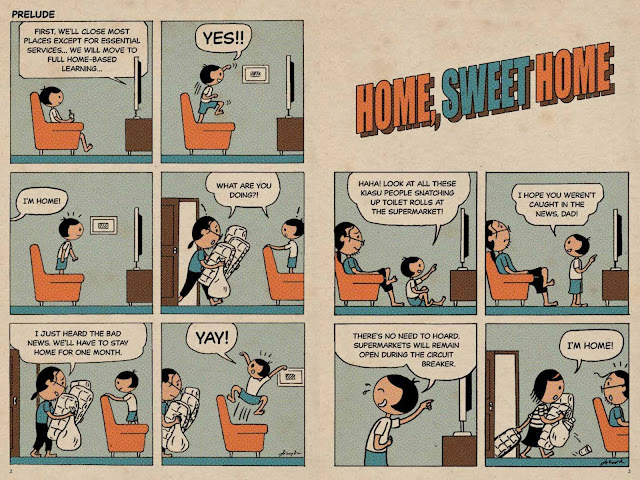 His first attempt foundered when he attempted to adapted his journal directly because a straight depiction of his daily life quickly grew dull. Working with Lim, the strip’s look and content gradually evolved to humorous stacked panels, which could eventually be collected in a book, and also displayed in an exhibit. But at the beginning, he mostly wanted to draw a webcomic that he collected as a pdf and submitted it in fulfillment of his grant. The initial project took three months, but for a book, he needed to double the amount of strips, and he didn’t think he could force himself to do more. The end of the book as a result is a post-circuit breaker follow-up and some single-panel ‘lessons’ that Chiang learned. 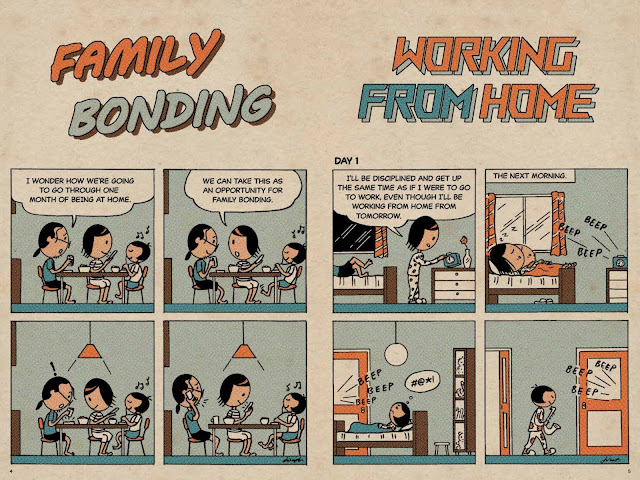 The book is laid out by day – a prelude introduces the government’s plan and his wife’s immediate hoarding of toilet paper, and his family’s reaction to bonding – by looking at their cell phones just as they had been earlier, day 1 shows his daughter getting tired of her parents ignoring their morning alarm, and deciding to wake them with her saxophone, day 3 is his decision to launch a comic strip about his family (and his favorite page of the book). By day 10, he shows himself being winded by the exercise of running around his couch three times; on day 17 Chiang shows his mask snapping and his running and hiding in a toilet; on day 33, he draws a very traditional gag cartoon of playing Scrabble with his family and getting “covid” as a word; and by day 53, he’s got a suntan except for his mouth where his mask has covered it. 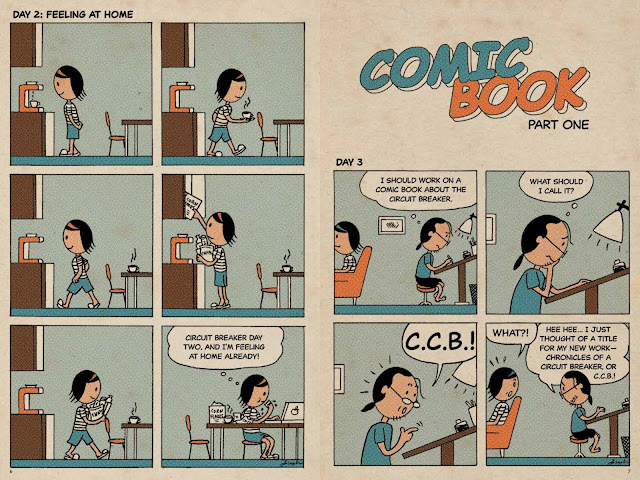 Chiang’s simple, clear cartooning, influenced by American indy cartoonists and traditional comic strips (and colored with faux Benday dots to reinforce that), is a both a serious recounting of some of the issues of isolation and over-familiarity brought about by quarantine enforcement and the fear of a communicable disease with no cure and unclear etiology, as well as an enjoyable light family comic strip. I would definitely recommend this volume to those interested in the genre.  An interview by Lim with Chiang, with a discussion of the cartoons and a look at the exhibit of them, can be seen on Facebook at <https://www.facebook.com/109354309101740/videos/312307143951724>

A version of this review will appear in print in issue 23:2. Epigram publishes other graphic medicine books including White Coat Tales about attending medical school in Singapore, and The Antibiotic Tales by acclaimed cartoonist Sonny Liew. Also available online is James Tan's All Death Matters, about end-of-life care.