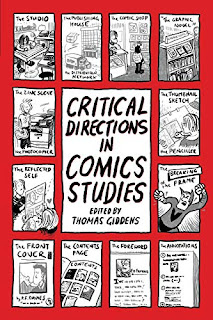 In our experience, matter ordinarily comes in three varieties: solid, liquid, gas. Critical approaches to an art form come in three varieties too: first, fan takes and essays aimed for those who already care about the primary texts. Think film-fan magazines, or letter columns, and then The Comics Journal; think Samuel Johnson’s essays, too. These can be a gas: they circulate rapidly, though-- confined to periodicals-- they may not stick around.

Second come more ambitious and more formal explanations, either showing new audiences how to take the art form seriously, or else laying out tool sets other critics can use. In our field that’s Scott McCloud’s Understanding Comics; in another it might include E. M. Forster’s Aspects of the Novel. These takes often demonstrate canon formation too, along with counter-canons, anti-canons, and anti-formalist populism (think Pauline Kael). They are the liquids of critical thinking: some move slowly and smoothly, some try to cover everything, and they rarely vanish into thin air.

Third come the books and articles after a canon, a working history, and a formal vocabulary have solidified. Extended works of criticism respond to earlier works; models from other disciplines sometimes alien to practitioners—Continental philosophy, say, or data analysis—build out a robust academic field, taking part in continuing debates that exceed one art form’s discursive world.

Critical Directions in Comics Studies is by these standards a very solid book. “Critical” in the title connotes not only literary and comics criticism (though that too), but self-conscious multidisciplinary approaches to an academic field, with overtones of critical legal studies, Continental Marxist thought, and other radical critique. Its best parts will lead almost any comics critic to ideas they might not otherwise have find.

If there’s a through-line, it comes from legal studies (five of thirteen contributors, including editor Giddens, come from the law): comics, according to much of this volume, reveal the assumptions that underpin modern society by breaking its stated or unstated rules. Christopher Pizzino’s opening chapter adds a persuasive reading of Kyle Baker’s magnificent Nat Turner (1986), with its frame-breaking, texture-heavy pages, to a perhaps unhistorical broader claim. There’s something especially mediated, material, embodied about a comic book, Pizzino suggests, so that “its great theme is violation,” whereas—with its disembodied prose—“the novel is on the side of the law.” (p. 27) Pizzino supports this contrast via the anticomics discourse of the 1950s. But almost every moral panic around a new art form has ventured similar claims: the new art (whatever it is) excites readers’ bodies, rather than guiding their minds. Consider video games in the 1980s, or Gothic novels via Northanger Abbey (1803). Pizzino’s emphasis on physical pages also raises questions: is the stunningly successful webcomic Check, Please! not embodied? Or not a comic?

Yasemin Erden gets more reliable results in her serious reading of (wait for it…) Marvel’s Deadpool, “a being without an essential nature” (p. 61) whose utter, disorienting, ridiculous freedom makes him an existentialist antihero, his “identity tied up with the breaking of things generally: of rules, of people, of walls.” (p. 69) (OK, but what makes him funny?)  Maggie Gray offers a careful history of comics-making at the countercultural 1970s Birmingham Arts Lab, with its anti-elitist, anti-commercial mission, “distributing expertise… and democratizing culture and media.” (p. 123) And Matthew J. A. Green examines Utopian visions in Mary and Bryan Talbot’s The Red Virgin and the Vision of Utopia (2016), a graphic novel about Louise Michel, who took part in the Paris Commune of 1870 and ended up in New Caledonia. Non-UK readers may, and should, discover the intricacies of the Talbots’ joint works here.

Books like this one often focus on indie comics, but the most complex of its persuasive arguments takes on a classic Marvel hero. Timothy Peters looks at secular law and Christianity in two runs of Daredevil, whose alter ego Matt Murdock is both a blind lawyer and (since Frank Miller’s run in the 1980s), a devout, troubled Catholic. Kevin Smith’s 2003 story “Guardian Devil” shows Matt deceived by material entities, as if Creation were full of snares (a deeply Protestant position). Miller and David Mazzuchelli’s “Born Again” (1986) instead finds a “participatory legal aesthetics,” showing in Daredevil’s actions and in our experience of comics form how our bodies exist as “part of the law.” (p. 99) Like Matt, we must connect justice to equity, rules to cases, spirit to all of the senses, removing the law’s metaphorical blindfold.

What if the best thing to do with the law is to break it, to smash an entire society in hopes the future will build something else? That revolutionary, or anarchist, hope animates several writers here. Two focus on Alan Moore and David Lloyd’s V for Vendetta, whose anti-hero or hero in his Guy Fawkes mask brings about (according to Peter Goodrich) “the destruction of Parliament, the end of representational politics… so as to take back the theatre of the political and embody it in the community.” (p. 257) Giddens himself recommends the graphic novel 100 Months (2010), which the British artist John Hicklenton completed as he was dying: its demonic heroine Mara “is the unstoppable wave of beyond that destroys, that undoes and razes” a humanity ruined by capital. (p. 229)

These essays enlist Walter Benjamin (despite his protest against the aestheticization of politics!) and Giorgio Agamben (“bare life cannot separate itself from sovereign power”) (p. 210) in a somewhat predictable anti-political politics. People who have lived through revolutions rarely end up so excited about them. Fortunately the collection does not end there. Instead it concludes with another legal scholar, Adam Gearey, examining the 2010 graphic memoir To Teach, in which the onetime Weather Underground revolutionary and present-day expert on pedagogy Bill Ayers, together with artist Ryan Alexander-Tanner, model the open-mindedness teachers require: “unless you confront your own self-certainty, you become lost in your own impeccable radicalism.” (p. 293)

Matter actually has four states, not three. Under high enough heat and pressure, it turns into plasma, a gooey high-energy state that eliminates boundaries between atoms. Comics criticism, too, has a fourth state, in which it becomes its own hand-drawn subject. In a trio of “comics interludes,” Giddens, the education researcher Lydia Wysocki and the literary scholar Paul Fisher Davies cartoonify their preferred, and self-conscious, approach. Wysocki parodies Olivia Newton-John’s music video for “Physical,” whose stills give Wysocki a model for her light-hearted, multi-modal, heteroglossic, frame-by-frame affair. “Let’s get critical,” her headband-wearing athletes demand. “Let’s get into critical.” (p. 106) There’s a lot to get into here.

A version of this review will appear in print in IJOCA 23-2.