Book Review: A History of Women Cartoonists by Mira Falardeau 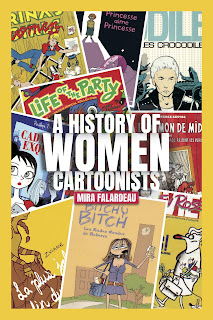 Working in comics, cartooning, or animation was for a long time perceived as man’s work and this is slow in changing. In A History of Women Cartoonists, Mira Falardeau envisions how we can turn the tide. The title of the book shows that one of the ways in which change can be brought is by including more works by women in the canon and to do this by valuing work published by women from the early 20th century up to the most current day. Even if the book is largely a history of women artists, the last chapters have a different tone.; they act as a call to action in order to get things to change!

In this book, Falardeau gives an overview of the work of creators from the United States, from English Canada and Quebec, from France, Belgium and Switzerland and from the Middle East and the Maghreb. The main portion of her book is structured according to these four regional cut-outs. In her general introduction, she acknowledges that her book, thus, limits itself to only a part of the world’s production by women artists. Such a project, by its very nature, can be celebratory, but deciding who should be included can always become an issue. Falardeau has chosen to reference a larger number of artists in the introductions she writes for each of the four sections that constitute the main content of the book. For example, in her section on the United States she refers briefly to some 60 authors; out of this number, Falardeau selected 15 for whom she has written a more detailed biography, while describing that author’s most important works.

Falardeau’s book is designed to bring forth the similarities in the obstacles that women are faced with, whether in cartooning, comics or animation. In her introduction, she makes a point of noting that these three mediums share elements of a common language. In animation as in comics, women have been less recognized than men and Falardeau’s book works to tilt the balance. This is especially important, for instance, if one is to have a proper historical view of the animation that came out in 1930-1960 period: among the women animators portrayed are two pioneers: American Mary Ellen Bute and Canadian Evelyn Lambart.

A most interesting aspect of the book is its comparative nature. If the section about the United States will not bring any new names to the attention of those who have read Trina Robbins and Catherine Yronwode’s Women and the Comics, or Trina Robbins’ follow-up works, including her more recent Pretty in Ink. Falardeau does a great job in comparing the general economic context and the prevalence of misogyny at different times in the four contexts that she has chosen to look at. For instance, Falardeau links the relative openness to women in newspaper illustration in the United States to the fact that America developed early on a very dynamic illustrated press and that the sheer number of positions opened some of them up to women. She notes that this was not the case in Canada, either English or French, where she finds that women only began to have a presence as major newspapers added women’s pages and children’s pages to their pages from the 1940’s on. In France, there were numerous girls’ magazines in the early 20th century. However, very few illustrations in such publications were attributed, and even if it is likely that there were women illustrators, most worked in anonymity. Falardeau’s section on the Middle East and the Maghreb is the shortest of the four and she touches very lightly on the political situations in different countries only to point out that, if some women have found it easier to create as expatriates, others became professional illustrators  to work in their home country. Through this comparison of the history of the press, Falardeau compares feminisms within different national contexts finding more advances for women in the United States.

“Should we link this abundant production to freedom of expression generated, on the one side, by a fundamental tradition and on the other, by successive waves of immigration providing the most innovative ideas of feminist thought? Ultimately, the United States were at the forefront of comic’s innovations while the other countries remained a little more conservative.” (p. 154)

Falardeau also points to the differences as to how second-wave feminism entered comics. Whereas in the U. S., this was mostly in comic book form through counterculture publishers, in France, it was the publishers of the science-fiction magazine Métal hurlant who thought that there was a market for a feminist publication in the world of bande dessinée and developed Ah! Nana a quarterly that came out from 1976 to 1978. The title roughly translates to Hey! Gal, but is homonymous with the French word for “pineapple.” In the section about Quebec, Falardeau briefly situates herself in this. As women’s magazines were taking on feminism, one of them asked her to create a strip which she did for from 1976 to 1978. A few years later (1981-1987), Falardeau joined a specifically feminist monthly, La Vie en rose, covered political and social issues; it gave humor and cartooning an important place.

The small press movement of the early nineties embraced autobiography as an important genre in which quite a few women creators of the period found their niche. Falardeau points to the fact that there already was an important autobiographical strand in the work of many women artists before that and refers to Mary Fleener’s comics in the underground movement, Lynda Barry’s early work in alternative weeklies and Lynn Johnston’s syndicated strip For Better or Worse. Even if there have been some opportunities for women in the past decades, feminist criticism has highlighted the slowness in openings within the mainstream. For those who remember Robbins’ criticism of the closed doors for women at Marvel and DC in her 2001 book The Great Women Cartoonists (to which Falardeau refers), there is a sad resonance to be found in more recent criticisms in France against the Angouleme International Festival which has granted its Grand Prize to only three women since it was founded in 1974. One of the festival’s attempt to correct the situation was miserably sexist; in 2007, the festival had come under heavy fire for having named an event “the brothel”, “La maison close.” In 2016, a collective of women authors called for a boycott because that year there were no women at all in the list of thirty author candidates for the Grand Prize.

In accounting for current production by women, Falardeau takes into account the rise of webcomics. She duly notes issues that come with self-publication on the web, especially that of needing to monetize one’s work, and the fact that, especially for younger artists, webcomics have served as a springboard to get attention from traditional publishers. Here she brings to attention a few artists in each of the four geographical groupings she highlighted. Her book is a who’s who in this new medium, from Meredith Gran and her comedic Octopus Pie to the tidal wave of blogs in France (many of them by women in the early years of this century), to the more recent political use of Facebook posts by Nadia Khiari in which she drew, Willis from Tunis, a cat who commented about the Arab Spring.

Even if Falardeau’s book is mainly designed as a canon-making work, she has found it important to show how empowerment of women cartoonists has been possible over time. In a chapter titled “Three Examples of Positive Action,” she opens with a short history of the New Yorker magazine. Its liberal founders, Harold Ross and Jane Grant published a great number of women illustrators. Her brief overview of the less-than-great record of the magazine in the ‘50s and ‘60s in its openness to women is meant to show that there needs to be an awareness about patriarchy’s hold on the workplace, and on certain types of work at the decision-making level, if change is to be attained. She makes this even more clear with her next example. The National Film Board of Canada developed structures in the early 1980s that encouraged the development of a women’s cinema. However, it was only in 2016 that the organization gave itself the goal of getting to 50% of its productions directed by women. Political cartooning still is, by and large, a line of work in which the number of men is disproportionate.  The organization Cartooning for Peace, founded in 2006, has chosen to value the membership of women cartoonists in many of its activities.

A History of Women Cartoonists translates and updates Falardeau’s 2014 Femmes et humour published by the Presses de l’université Laval. In each of the contextual pieces that precede the portrayals, Falardeau added a new paragraph or two. Among the additions in the section discussing the United States are Lisa Hanawalt and Eleanor Davis. In the section about Canada, she features Emily Carroll’s innovative work with webcomics. The call to boycott the Angouleme festival in 2016 is one of the new additions in the contextual text about France. In the case of artists from the Arab world, she added references to a few political cartoonists, among them Samira Saeed and Menekse Cam. However, the editorial work on the book by Mosaic Press is subpar. There are words in which a letter is missing. Some names have not been checked. For instance, when referring to French academic Judith Stora-Sandor, her name is properly spelled on page 22, but misspelled twice on page 246 as Stora-Standor and Stora-Stantor.

Falardeau concludes her book by taking on a certain number of issues. For instance, in cartooning, how can a character be designed to represent humans in general? She notes that the use of characters identifiable as women will lead to an interpretation of the drawing as referring to women specifically. Can the universality of a situation only be represented by the inclusion of male characters? Then there is the issue of caricature --in exaggerating characteristics, one runs the risk of encouraging stereotypes. The situation is not much better in the work of academics who analyze the work of women, where the cliché is noting the ‘sensitivity’ of the work of a woman author. Falardeau closes this short chapter by noting “the obvious link […] between humor and power, and consequently, the difficulty for women […] to achieve recognition for themselves in the world of humour” (p. 247). Destroying stereotypes takes time. “This is the task that feminist women cartoonists have given to themselves. But which stereotypes? Those held by men? The way that they see women? Or the opposite? The way women see themselves?” (p. 258) The last words in her conclusion come as an answer: “Women cartoonists need to create their own mythology.” (p. 269)

A version of this review will appear in print in IJOCA 23:2.