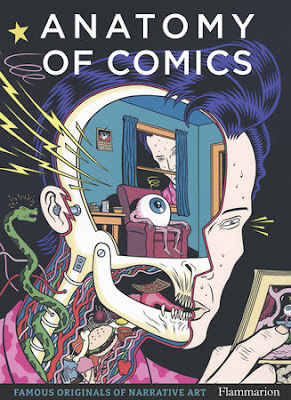 The field of comic art has always been an extensive, albeit misunderstood or misinterpreted, one.  There have been multiple attempts to document the historical development of the field, as well as the impact or interpretation of artists and their creations.  To that end, Anatomy of Comics goes into more detail as to the connections between many different media.

The book is a project of the la Caixa Foundation in Spain which analyzes the cultural aspect of all cultural media, from music to dance to art.  This book is a catalogue of an exhibit, Comics, Dreams and History, curated by MacDonald, which will be on display at nine different museums in Spain. That exhibition was based largely on the collection of Bernard Mahe, with contributions from various artists. The book is a natural extension of the exhibit where each subsection focuses in the intersection of different media, as well as gives examples of each theme. “Anatomy” is the overarching theme of the book though, with a cover illustration of a dissected head by Charles Burns, reproducing his cover of Metal Hurlant #120. Reproductions of original artwork illustrate the book, which is divided into five chapters of different themes, based loosely around that anatomy theme from the title. The book unfortunately does not list the media of the illustration – pen and ink, watercolor -- only the use it was put to – illustration, cover, Sunday Paper.

Section one was entitled “Tongue-in-cheek: A multi-lingual birth process.”  This section went through a discussion of how comics were created.  One quote of interest from this chapter was that the book is a “lover’s guide to the anatomy of comics, rather than a formal dissection.”  While the wording may seem somewhat disturbing, the theme of different origins and different reactions to comics is important.  There is a discussion of Winsor McCay’s work on Little Nemo in Slumberland, as well as Richard Outcault, but also that of Rudolphe Topffer whose first work was published in 1821.

Further analysis shows how concepts such as shapeshifting characters becomes an integral part of comic book storytelling.  McCay used the concepts of shapeshifting in his work, showing a dragon acting as a carriage for a princess.  MacDonald also argues comic creators had to shift their skills from different media into the comic art process. (p. 21) He noted that originally literature was accepted in the academics’ world, while comics were often considered throwaway work, but now those same comics are studied by academics.  The first school to offer a formal scholastic program of the study of comic books was in Belgium, The Belgian Ecoles Superieures des Arts Saint-Luc in 1969. (p.25)  The shapeshifting of and changes in characters can also be a reflection of the changing persona of the creator, whether they changed their name for more work, or obscured their race or gender to gain access to the market.  It all reflected the dual-identity nature of the characters as well as the creators.

MacDonald’s additional analysis of characters acceptable mutations as time passed and publishing options changed shows the evolution of cat-based characters from George Herriman’s Krazy Kat to the counterculture creation of Robert Crumb’s Fritz the Cat and Fat Freddy’s Cat by Gilbert Shelton. Finally, a multi-lingual approach looks at the use of idioms and slang, and he argues this was often used in American comic characters to gain immigrant readers.  This influence went both ways, and creators also added foreign concepts or language – such as Yiddish – into the American lexicon.

Part II “The Third Ear – the onomatopoeia unleashed” dealt with cartooning as an extension of language, and also discussed the rhythm of comic art and its relation to music.  The chapter noted that some creators such as Robert Crumb or Jean Giraud (AKA Moebius) created album covers that reflected their comic book origins.  Most of the early chapter centers on Will Eisner’s approach to building stories using pacing and tone akin to films to construct effective stories.  In an interview, Eisner said, “I write in onomatopoeia, which relies on instinct rather than just the conscious mind. Most of my writing is done by sound and visual.”  MacDonald takes the first part of the phrase and returns to it again and again to argue that comics creation is always a mixture of verbal and visual parts. The section includes the movement of characters via mechanical means such as airplanes.  Using Charles Schulz’s Peanuts, Joe Kubert, Herge, and several others, the concept of travel and movement is explored and expanded.

Part III “The Mind’s Eye – Mavericks, Rebels, and World-builders” starts off with a quote from Alan Moore about how the reader controls the time and pacing of comics, unlike in film, a point that has been noted by many others.  Many innovative comic creators focused on creating and showing a fantastical aspect of life that couldn’t exist in any other media, which in American comic books culminated in superheroes.  To that end, Macdonald notes that ideas espoused by Nietzsche (the idea of the Ubermensch or Supermen) were co-opted by the Nazis in the 1930s, even as Nazis came to see comic books as a form of degenerate entertainment created by Jews. MacDonald also looks at some early creators with examples of Milton Caniff’s Steve Canyon and Chester Gould’s Dick Tracy.  An interesting comparison is made with relation to early films similarity to comic books.

From this point the rest of the chapter centers on the various aspects of an idealized world presented in comic books.  From the images associated with action strips like Tarzan, Prince Valiant, and Flash Gordon, to the European concepts presented in Capitan Trueno, El Principe Encanto, and the Steel Claw, and then John Buscema’s work on many of the Marvel characters in the 1960s and 1970s.  Nods are given to Chris Ware, Phil Davis and Jesus and Pili Blasco, with the culmination of the chapter quoting from Neil Gaiman, who noted that “Batman and Superman are transcendent.  They are better than most of the stories they are in.” (p. 137) To illustrate this point, the examples are extensive and range from Hugo Pratt to Mike Mignola.

Chapter IV “Ink and Paper Sex – Underground put X in Comix” deals with the role of counterculture in society.  Robert Crumb was quoted in the beginning of the chapter and MacDonald then looks at his characters, which are explored in detail for the commentary on race, class, or society embodied in them.  Sex and sexuality are a considerable aspect of comic art from the very beginning, and MacDonald includes how gender plays a part in the medium. He states that is important to understand the time they were created in, and that “[t]oday’s sometimes severe moral judgement of underground comics lacks historical perspective.” (p.190). Additionally, the X in comix may refer to the subconscious, as well as the aspects of psychoanalysis.  Serge Tisserson’s Psychoanalysis of Comics was the first to effectively attempt to understand the meanings behind the comics.  Macdonald also noted the Wertham study and its misunderstanding of deviancy as being caused or enabled by comic books.

Milton Caniff’s work on Terry and the Pirates and Male Call were done to accentuate the female form for a male readership.  Additionally, several examples were given of creators who pushed their work to play with concepts of sexuality, such as Frank Frazetta.  Even famed Italian film maker Federico Fellini noted that the comic books have a way of propelling the viewer in ways that the movie cannot.

The last chapter of the book “Skeleton Key – decoding the symbolism of comics” begins with creators known for their work on expanding the world and understanding of comic art: Chris Ware and Scott McCloud.  European cartoonists such as Enki Bilal, Yves Chaland and Jean-Claude Mezieres are included and tied into changing attitudes towards mysticism and androgyny in comics as well as the world.  The last anecdote of the book dealt with a film that never was, a film by Alejandro Jodorowsky, with story boards done by Moebius.  The concept had great connections across the media, from major film actors, to production backing, to music, but all to no end as it was never made but is a classic “what might have been.”  MacDonald ends by noting “Comic book making depends on low tech, ancient methods and materials: Paper and ink, but there has been an intrinsic link between cyberpunks and comics, hacker culture and sci-fi, counterculture and whistleblowers… Let’s hope may freethinking tricksters will use the tools of this medium, and invent a new symbolism that will keep the art popular, while avoiding populism. Let’s hope the dreamwork has hardly begun.” (p. 243) It connects all the chapters well.

From a historical perspective, the book offers new ideas and connections as to how different media play and use one another to push their own agenda.  The book reads as a companion to an exhibit and one gets the feel of the traveling displays.  The two biggest drawbacks to the book are significant but understandable.  First, there are no Asian examples of comic book creators.  This can be understood by being based on one man’s collection.  It should not be taken to mean that Asia has not contributed heavily to the media.

The second shortcoming of the book is that some creators may be overlooked. From an artistic standpoint, one might expect Alex Ross to be included in the book for his style of art.  In my opinion, British creators Carlos Ezquerra and Garth Ennis should also be included as their work in both scripting and illustrating materials is important to today’s comic book industry.  Overall, the book spurs the thought process of various creators and how they might be seen in a different light (Eisner’s work for the military producing educational, military cartoons comes to mind).

In all, it is a spirited book that makes interesting connections between the realms of art, literature, music and film to name but a few of the disciplines.  It is an approach that offers a reader insight into not just creation directly, but into the connections that make the field all the richer in the long term.