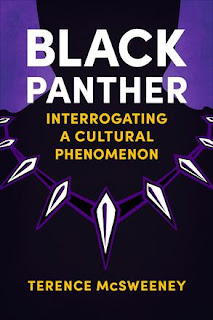 I am not sure of the point at which I became acquainted with T’Challa, the Black Panther superhero and hereditary King of Wakanda. The character was introduced in a 1966 issue of Fantastic Four, as a support player whose unsteady allegiance was reflected in other characters such as Namor, but who was Marvel’s first black superhero. As originally created by Kirby & Lee, Black Panther’s interests have always been mostly closely aligned with Wakanda, his fictional futurist African nation; it is only when the concerns of this nation and the wider world intersect that he springs into action. He first battled the Fantastic Four, and then became a regular member of the Avengers. This was all established well before I was acquainted with the character, whose first introduction to me was likely through a collectible Marvel trading card or action figure.

These days though everybody knows the Panther, largely due to the success of the 2018 film starring the late Chadwick Boseman which is the focus of this book. That is not a surprise as the film is amazingly well done, and addresses social and cultural issues whose resonance was only just beginning to spread in wider circles of white privileged culture. The original movie storyline, when pitched in the early 2000s, was going to be along the lines of an Indiana Jones adventure featuring a lost relic. In the film that was made, that lost relic McGuffin transformed into the interaction of Wakanda and the wider world as T’Challa sought to reconcile an unsteady and misrepresented past with the hope of being a good king.

In spite of the title, much of the book’s focus is on the film, rather than the comic book origins of the character, reflecting the author’s interest and research. McSweeney knows the film world well, but this reviewer wonders to what degree can he speak to the vicissitudes of Black experience? In the first chapters, the reader is offered a brief history of the character with nods to the comics, as well as the story of the film’s opening. All of this sets the stage and provides the background knowledge that the reader needs, although more information from the comics would have been helpful for knowing more about the 50-year-old character, in terms of his origins, motivations, and changing interpretations over time.

McSweeney also analyzes moments in the film featuring the supporting characters and villains, almost in summary form. Both the relatability and unappealing aspects of the characters, particularly in the Panther's rival and political antithesis, N’Jadaka, aka Eric Killmonger, are mentioned, but only briefly explored. McSweeny’s focusing on the film in itself reveals too much to uncover both in terms of historical context and character analysis – it seems each moment in the story deserves a full volume’s worth of summary and exploration, especially relating back to the foundational comic books.

A reader will encounter the Marvel Cinematic Universe’s view of Wakanda’s world, leading to what will hopefully become a fuller view upon reading the comics and engaging with what will certainly be an entire film series (at the time of this review, production on the second film is well underway). In sum, what McSweeney offers is more than a primer or appetizer, but still not a full course on one particular aspect or dimension of this transmedia character. This is understandable given the depths of how much information would have to be consumed, summed up, and explained to produce a more complete treatment of the Black Panther. I recommend reading this book alongside a stack of Black Panther comics, including the work that has been done by writers Ta-Nehisi Coates, Christopher Priest, and Don McGregor who created much of the underlying sources of the stories that the film redevelops.

A version of this review will appear in print in IJOCA.