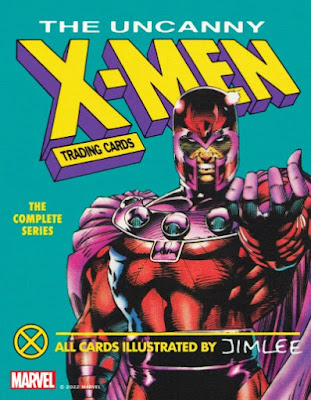 Reviewed by Cord A. Scott, UMGC-Okinawa

One of the most important parts of the comics industry have been the merchandising offshoots going back to the very beginning with the 19th century’s Ally Sloper or the Yellow Kid. It became particularly virulent in the era of the 1980s and 1990s when the market was expanding and more people looked at the comic book market not necessarily as ephemera but as an investment for future wealth.  As with so many aspects of speculation over items made for children, or adults attempting to recapture their childhood, it is no surprise that when the market collapsed, that many would be left holding worthless investments (at least until the next bubble). This premise of continuing interest in comics-related material that was hot, then not, is the focus of this book reproducing an entire X-men trading card series.

For some comic book collectors from that era, myself included, these cards will remind readers of their own collections and how they may have continued or ended. The book has a foreword from Ed Piskor (X-Men, Grand Design author) who writes how the industry had morphed from the traditional aspect of comic book sales (at supermarkets or newspaper shops), to direct sales shops and how Marvel wanted to capitalize on the success of their comic book lines and sell the characters to a wider audience. Piskor noted that many collectors hitched their bets on the market for many of these items. In the moment, the reasoning was sound. Marvel was having success with the popularity of their series, and the X-Men was the most lucrative. It was a “natural” development to produce trading cards of the X-Men characters for children to collect and trade, but how to sell even more sets? To that end, the cards had to have another hook to entice adult collectors. That hook was original artwork by Jim Lee, who had established himself as a talented artist for the Marvel bullpen (leaving to become a founder of Image Comics and he is now Publisher and Chief Creative Officer of DC Comics).

Lee’s art is the driving element of this book. Each card was illustrated by Lee, and was, with few exceptions, original work. To make the potential collector even more interested, there was a statistics sheet (lifted from sports cards, but now integral to Marvel’s desktop card games), and trivia fact on the back side. All these characters were taken from the X-Men series or their offshoots over the years. As was noted by Piskor, “Jim Lee’s superpower is dynamic illustration” (p. 10). Piskor gives the reader some background on Lee’s other work from that era, Punisher: War Journal, which offered art which was more apparently more detailed than other traditional artists. The early part of the book also explains how Impel Marketing looked to expand the trading card market by starting a series of famous Marvel characters, which were sold in 1991 under the titles Marvel Universe I and Marvel Universe II. Both Impel and Marvel thought that another series might gain even more attention (i.e. money) for both companies and one Marvel series had such a depth of characters: X-Men.

Bob Budiansky, the writer of the introduction of the book, was the executive editor for Marvel special projects, which had a “catch-all” quality of any non-mainstream comic book-related items under his purview. His insights into how the series came about and the eventual inclusion of Lee’s original art are interesting reading about the creation of ephemera. Lee was asked, as was the unstated rule at the time, to not poach artists from other projects within the Marvel realm. Lee signed on knowing that he would have to create original art for the cards, despite working on more and more projects.

Budiansky begins the introduction with a brief history of the X-Men comic, from its creation by Stan Lee and Jack Kirby in 1963, to its eventual end in 1970 when the company was having its financial problems, to its re-start in 1975 with new characters created to spur more sales. It was this “New” X-Men that gave the overall series new life and gained readers and success for Marvel. (Some would argue too much success, given the number of “X” titles produced both then and now). The production standards for the new cards were to be glossy to attract collectors, as well as give information and statistics to young people to spur interest in the comic books. It was also thought that some of these tidbits might gain more readers to the ever-increasing publications in the X-Men line. For the launch of X-Men volume 2, #1 in 1991, there were eight million copies sold, and this spurred on the frenzy for all things X-Men related. The series did sell well, and many thought the success would continue.

This section of the book also went into how the cards were created, and what sorts of subsets were created. For example, it was noted that card collectors were different from comic book collectors in their storage methods, using binders with plastic page with small sleeves for nine cards per page built in. This collector distinction changed the production, so that the cards were published not with ten per set, but nine, to fit the sleeve. To round it out to an even 100 cards in the series, a Danger Room montage was created with the last nine cards, and a checklist card was also created. Each package contained 6 cards. For the subsets within the sets, color coded Xs would appear in the lower right corner of the card, which denoted the team (gold and blue), red (allies), black (ex-X-Men), and villains (yellow). The back sides had to have written material that needed to be descriptive and original, including an “X-tra fact” but also be succinct enough to fit in 75 words. Lastly, Lee would personally sign some cards to be put into bonus packs, along with other limited issue items such as holographic cards. Budiansky includes some anecdotal evidence of how collectors reacted as children to the cards, which always brings a bit of life to a book of collecting items. 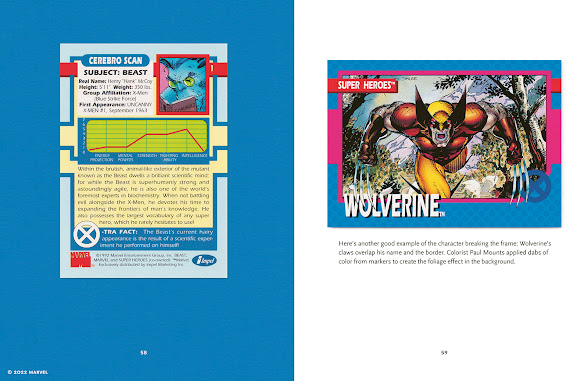 The remainder of the book reproduces the entire series of cards, but apparently not all the variants included in toy packaging or comic book magazines that Budiansky describes in his introduction. In addition to the front and back of the card on consecutive pages, there are occasional production notes from colorist Paul Mounts who also worked on coloring the Lee drawings for the cards. One such notations is that for the Gambit card, the character is smoking. This simple illustration was a controversial one as the US cigarette industry was in lawsuits over the use of cartoon characters to promote smoking to children. There are in fact several cards with X-Men smoking: Gambit (p.92) Shadow King (p. 188), Mastermind (191) and Wolverine (p. 246).

Some of the characters produced for the series are old and familiar ones: Storm, Wolverine, Gambit, Magneto, Beast and Jubilee to name, but a few. Some of the characters seem wildly out of place, as they were sometimes new characters recently introduced to the X-Men series (Maverick, p. 133 is one) only to fall flat with readers who didn’t find the character compelling. Some characters such as Deadpool are far less defined then their character would evolve into. Mostly the cards center on what is became the bane of the X-Men series, and some say a central reason for the 1990s collapse of the comic book market: too many characters and teams, too many books, and too many variant covers and other gimmicks, which led to an oversaturated market. 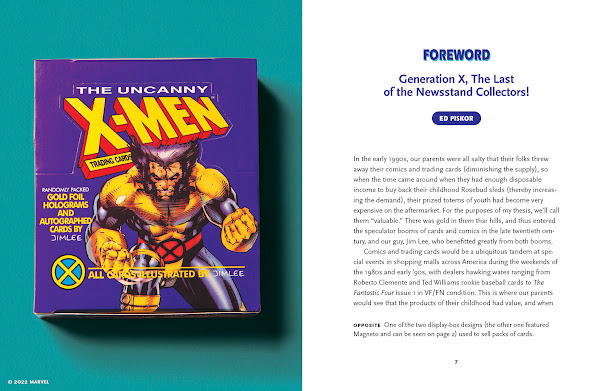 For example, there are some cards that deal with the various X-Men related comic teams. There is the Gold Team (Storm, Colossus, Jean Grey, Bishop, Iceman and Archangel) and the Blue Team (Cyclops, Wolverine, Beast, Rogue, Psylocke, and Gambit). X-Force is one that has Cable and a few other notable heroes. Excalibur was the British team. Some of the villains’ organizations come across sounding like modern terrorists or trade unions in hindsight: The Brotherhood of Evil Mutants, the Mutant Liberation Front, and the Hellfire Club. Other lesser known affiliated groups such as the Technet and the Upstarts are also included. There were some of the lesser known dead or retired Ex-X-Men, and finally the Allies of the X-Men. All these different characters and groups appealed to the hardcore readers, but they seem a bit redundant when one is trying to collect the main characters.

The last section of the book looks at the 9-part Danger Room scenario and the information associated with it, such as the power ratings and the aspects of the Danger Room. Here there was some re-printing of previous art, especially for that of Cerebro, the supercomputer. The art was taken from comic books and tweaked so that it would fit on the card. The hologram cards are also showcased. Throughout the book were commentary on how some designs were altered from the original aspect to allow for more dynamic viewing. Other comments noted the mistakes of the cards, which might make them more valuable due to passing quality control.

In all, the book was interesting in some aspects and a bit less in terms of the contribution to comic book history literature. Lee did some phenomenal illustration work, and the explanations of how the cards were presented to make the characters pop out, or otherwise become dynamic, was interesting. The side notes from Paul Blount or Ken Baroff from Impel added interest to those who might like to know trivia. And for the author of this review, it does bring back a nostalgia for the collecting from that time. However, the book also notes how the overreach beginning to be defined by X-Men comic books and derivative cards sets was the demise of the both markets in many ways. Too many variant issues and too many imprints drove the collecting market into different and unsustainable territories. If one didn’t have the money or time to purchase multiple issues due to the variant covers, eventually interest might be lost when the person decided to take their money elsewhere. When combined with the inflated prices for “rare” items, the speculation of what may make money or be valuable in time, combined with oversaturation of the market and plain old corporate greed, its easy to see where these cards may have added to the collapse of the speculator bubble in trading card and comic books.

None of this takes away from Jim Lee’s illustration work, nor does it diminish the overall book. It just reminds those collectors of that era what might have been, and what was. The book does what it was intended: it showed how one medium influenced a wider variety of merchandise to sell to possible new comic book readers as well as existing aficionados and trading card collectors.