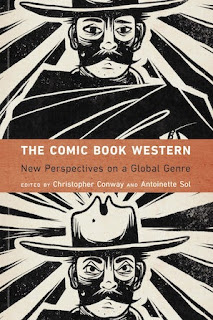 [Until December 31, all books are half price - enter 6HLW22 in the promotion code field of your shopping cart and click "Add Promotion Code" when making your purchase.]

Christopher Conway and Antionette Sol have assembled a well-conceived and well-executed anthology exploring the development of the Western genre in international comic books. Their introduction lays the foundation for the book by briefly summarizing the origins of the genre within the American comic book industry and the conduits through which the genre initially established itself in other nations. The introduction, however, is the last time the United States is the focus of the anthology. All ten of the subsequent chapters of the book are devoted to the Western within different comics traditions, Though Conway and Sol discuss the role of U.S. companies in popularizing the Western comic abroad, nearly all of the chapters are devoted to stories developed within the comics industries of these different nations, as opposed to merely imported comics.

It may seem counter-intuitive that a genre so steeped in the ideological morass of exceptionalism, individualism, and colonialism peculiar to the United States would enjoy enduring popularity with international audiences. Even a casual observer of comics around the world, however, knows that the Western’s appeal is widespread. The Comic Book Western addresses how the genre gained a foothold internationally, but also how the genre evolved and, in many cases, thrived within these disparate cultures. The overarching premise of the book is that the global popularity of the Western genre has endured because creators “reterritorialize” or “destabilize” the conventions of the genre, adapting its recognizable conventions to fit within different cultural milieus.

The structure of the individual chapters is remarkably uniform for an anthology. Though the book is divided into “Transnational Histories” and "Critical Reinscriptions,” the difference between the sections seems to be one of degree. All of the chapters trace the growth of the Western within a specific comics tradition, many of them reaching back into the 19th century to identify the culture’s first exposure to the western form.  Each chapter also provides a deeper analysis of a specific title or titles to illustrate the unique character of the Western in that nation. Furthermore, the anthology strikes a good balance between chapters that focus on well-established, critically-acclaimed titles, such as Blueberry and Sargento Kirk, and titles that are more obscure.

Each chapter traces what the editors call the “vital dialogues with local and transnational currents” that comprise the Western tradition around the world (3).  For instance, Sol’s chapter on Blueberry and the Franco-Belgian tradition identifies 1960s counter cultures as part of the impetus behind Charlier and Giraud’s anti-hero. While the counter-cultural revolutions of the 1960s changed the Western in nations around the world, Sol also notes that Blueberry’s aesthetic owes a great deal to the “local” cinematic tradition of the French New Wave.

Much of the “reterritotrialization” occurs through the merging of genres. Manuela Borzone’s chapter notes how Argentinian creators merged the Western with their own gauchesca tradition. Similarly, Christopher Conway shows that, despite their almost exclusive portrayal of American settings and the absence of Mexican characters, Mexican Westerns are infused with melodramatic conventions of sentimentality and family values that make them a uniquely local product.

In addition to the nations mentioned above, The Comic Book Western includes chapters on Germany, Italy, Poland, Great Britain, Spain, Japan and Canada. Joel Deshaye’s chapter on Canada is noteworthy because it includes the only exploration of an indigenous creator using comic book conventions and Western themes. Several chapters touch upon the portrayal of Indigenous Americans, but Deshaye’s discussion of David Garneau’s comics-inspired paintings—which make use of panels, gutters, and thought bubbles—is the only chapter to address an artist whose heritage is from one of the indigenous nations that the genre so exploits.

The anthology contains sixteen black and white illustrations. Many of the images are covers. Nearly all of the images do important work, and the authors all explicate them well. However, I found myself wanting more. With such a wide range of source material, at least some of the comics are bound to be unfamiliar to portions of the readership. This is not a problem unique to this anthology of course. I would guess this was a limitation imposed by the publisher and not the editors. A more liberal use of images could have better illustrated points the authors are making.

In the end, though, my criticisms are few. Conway and Sol have assembled a rich anthology, a balanced, insightful volume that effectively addresses the global nature of its subject. In their introduction, they articulate the modest hope that the book helps “to make the study of comic book Westerns less implausible than it has been”(6). I have no doubt of that. In fact, I suspect comics scholars interested in the Western genre, or in comparative studies in general, will find this a useful resource for years to come.

Table of Contents
Introduction: The Globalization of the Comic Book Western by Christopher Conway and Antoinette Sol

1.      Italian Western Comics and the Myth of the Open Frontier by Simone Castaldi

2. Comic Book Westerns and the Melodramatic Imagination in Mexico by Christopher Conway

3. German Western Readers and the Transnational Imagination by Johannes Fehrle

4. Beyond Parody: Polish Comic Book Westerns from the 1960s through the 2010s by Marek Paryz

6. Argentina’s Outlaws and the Revisionist Western: The Case of Héctor Germán Oesterheld and Hugo Pratt’s Sargento Kirk by Manuela Borzone

7. British Comics and the Western: The Future West, the Supernatural, and Strong Women in The HellTrekkers, The Dead Man, and Missionary Man by Lee Broughton

8. Canada’s Triumph Comics and David Garneau’s Métis Response to the “Indian” of the Comic Book Western by Joel Deshaye

9. A Spanish View of the American West: El Coyote and His Comic Magazine by David Rio

10. Faraway So Close: The Representation of the American West in Igarashi Yumiko’s Mayme Angel by Rebecca Suter